Despite the bad press, Muslim countries have one of the richest and most fascinating cultures to discover. The media paints an ugly picture of hateful radicals, but if you’ve visited or lived in a Muslim country, you will see that it is an unjust stereotype. Behind the sensationalism is a very misunderstood community, one that is filled with compassion, kindness, and hospitality.

What better way to understand a culture as it truly is than to experience it firsthand? Here are 12 top things to note lest you get culture shock in this religiously-sensitive part of the world.

1. Not every Muslim country has the same attitude towards women

It is interesting to note that despite the media stereotype, not all Muslim countries have unjust laws against women. The cultural attitudes towards women differ depending on how conservatively the locals interpret their religion. Southeast Asian Muslim countries like Malaysia and Indonesia are far more liberal compared to Middle Eastern or African ones.

For example, in strict countries like Saudi Arabia, women are not allowed to drive. This is not true for more relaxed countries like Malaysia or Indonesia where you can see many Muslim women, with and without the hijab, out and about, working outside the home and driving. Brunei even has a team of all-female pilots proving what Muslim women are capable of. Alternatively, you might feel safe going around with a male driver and a car in Oman, but it wouldn’t be acceptable in Saudi Arabia to the north.

Regardless of nations, the locals would expect visitors to respect their customs.

2. Greet men with a smile and a nod

For those who are accustomed to greeting people with hugs and cheek kisses, be mindful that Muslims value modesty and respect. Especially when meeting strangers, greeting them with a smile and a nod will suffice. Men do not usually reach out to shake a woman’s hand unless she initiates it. In some countries, be prepared for your proferred hand to be ignored or politely refused. It’s not meant to offend but if you are sensitive, it’s safer to simply nod your head.

Some countries may be used to tourists in shorts and singlets, but as a general rule it is recommended to dress modestly. Take a cue from what the women in the area are wearing. In more liberal parts of town you could get away with a minidress; in conservative villages people will stare if you’re in shorts. In fact, you might want to leave the hot pants, crop tops, spaghetti straps and minidresses at home. Pack plenty of light and loose clothes that will cover your arms and knees. If you’re in leggings or skinny jeans, wear a long top that will cover your bum.

The expectation for foreigners to wear a headscarf differs from country to country. In Egypt, foreigners needn’t cover their heads, but Iranians expect all women to cover up. You might want to check the travel advisory for the specific country you’re visiting.

Did you know: Travelling to other Muslim countries are tricky for born-Muslims too. Read: Anita Ahmad: I Survived A Bombing In Iraq And Had To Prove To Arabs I’m Muslim

4. Always carry a shawl or pashmina

5. Shoes off and cover up when visiting mosques

Muslims consider mosques as religious places whose sanctity must be guarded, and take great care in doing so. It is customary to take their ablutions at specially designated areas separately for men and women before performing their prayers.

As sacred as their place of worship is, they still welcome tourists from all walks of life. Reciprocate their hospitality by respecting their religious sensitivities. Firstly, remove your shoes before entering the mosque. Secondly, dress conservatively with your arms, legs and head covered. Some touristic mosques even go the length of providing ladies with an abaya (robe-like dress).

6. Be respectful when taking photos at religious places

One popular cautionary tale is of Rihanna being asked to leave the iconic Sheikh Zayed Grand Mosque in Abu Dhabi. Rihanna was covered from head to toe, but shocked the mosque officials when she started posing for a sultry photo shoot that was deemed inappropriate and disrespectful to the religion.

7. No pork in halal food

Muslims are prohibited from consuming pork. Chances are, you’ll not be able to find pork in strict Islamic countries in the Middle East. In Muslim countries with a strong multi-religious presence like Malaysia and Indonesia, however, it would be easy for you to get your pork fix at any non-Muslim restaurant.

If you’re eating out with friends who are Muslims, it would be polite to suggest foods or restaurants that are halal. Look for the ‘Halal’ logo to be sure if a restaurant is compliant to Islamic laws.

8. Know where to drink and dance

As with pork, Islamic laws prohibit alcohol, which can make it a rare commodity in some Muslim countries. Muslims may not drink, but they are accommodating to tourists who do. Alcohol is easily found in touristic areas and parts of town with a non-Muslim majority. In fact, Egypt and Jordan even manufacture their own beer. In multi-ethnic, multi-religious countries like Malaysia and Indonesia, alcohol can be found in many bars, restaurants and hotels, and are consumed openly though not necessarily by local Muslims.

As for clubs and bars, you might be surprised to know that cosmopolitan cities like Kuala Lumpur, Jakarta, Beirut, Cairo, and Istanbul have some of the most lively night scene. The trick is to know which parts of town drinking and dancing are acceptable, and which parts of town to party indoors.

Nonetheless, be conscious when inviting a Muslim friend or colleague for drinks at a bar. You might not want to bring wine or beer to a Muslim’s home. Though some liberal Muslims do consume alcohol, it is safer to assume that they do not.

Can you wear a bikini at the beach? Once again, take the cue from the locals. It is usually acceptable to don your two-piece at private pools or beaches that house more tourists than locals. At public beaches, however, you might feel out of place in something so revealing. Bring along shirts and shorts that are comfortable to swim in; the locals are probably happily splashing about in t-shirts and pants.

In strict Muslim countries, you’re likely to come across men-dominated restaurants with not a woman in sight. Men and women, even if related, will sit separately in restaurants, at home, and even on public transportation. This gender segregation is not common in Southeast Asian countries.

10. An unmarried couple sharing a room is frowned upon

It is considered indecent for unmarried Muslims to share a hotel room with the opposite gender. While countries like Bangladesh may frown if any unmarried couples, regardless of religion, share a room, people do get away with it in places like Indonesia. Locals would often assume that if you’re travelling with a man, you’re married to him; it’s best to play along.

This is rarely an issue in big hotels, but in smaller hotels especially in small, conservative towns, locals might disapprove. In Malaysia, unmarried Muslim couples could get into trouble if caught by religious authorities sharing a room.

11. Plan your meetings around prayer times

Muslims are obliged to pray five times a day no matter where they are. Most establishments, whether office or malls, would have prayer rooms for them to perform their rites. Friday prayers are the most important for Muslims and most men would  go to the mosque. It’s best to plan your meetings around Friday prayers. At other times, be understanding when your friend has to leave to perform their prayers.

The Monday blues are not universal. As Friday is a holy day in Islam, some Muslim countries have Friday-Saturday weekends, with Sunday marking the start of the work week.

Once again, each country has different rules. The Arab states of the Persian Gulf have Friday-Saturday weekends while Brunei shakes things up with Friday and Sunday as their days off. Some countries including Lebanon, Turkey, Tunisia, Indonesia, Pakistan and Morocco follow the international Saturday-Sunday weekend. Malaysia, on the other hand, operates differently; the majority of the country follows international standards while the states of Johor, Kelantan, Terengganu, and Kedah practice Friday-Saturday weekends. 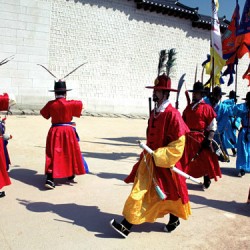 
7 Things Every First-Timer To Seoul Must...