From a confrontation with a rebel to surviving a bomb blast in Iraq, Anita Ahmad has had more than her fair share of danger, adventure and excitement on the road but it has not put the slightest damper on her wanderlust spirit. The Senior Vice President and Head of Community Development at a corporate responsibility foundation aimed at creating lasting positive social and environmental changes, started a blog in December 2015 called Travel & BE to document her many off-the-beaten-path journeys and encounters.

We sat down for a peek into her life, inspirations and aspirations as a traveller:

You’ve had some amazing travel experiences! What brought you to countries like Afghanistan, Iraq, Pakistan and Sudan – none of which are on the typical tourist’s radar.

Anita Ahmad: I became interested in volunteerism and humanitarian work, inspired by Tan Sri Dr Jemilah Mahmood of Mercy Malaysia at the time and was moved by a piece of news about an attack by the Israeli Defense Forces (ISF) on a UN school in the Palestine. I signed up as a volunteer with Mercy and worked full-time with them for several years. I then joined the United Nations’ Development Programme and stayed with them for seven years.

My work took me to those war-torn countries, starting with six months in Afghanistan – we stayed in Pakistan though, and crossed the border each day – followed by stints in Cambodia, Iraq, Indonesia, Sudan and Syria. In between I took a year off to do my Master’s degree in the UK.

Clearly, you have wanderlust flowing through your veins. Where do you think you got it from?

AA: Definitely my parents, who have always been avid travellers. My dad is of Bugis descent, known traditionally to be skilled seafarers, and befittingly, he owned a yacht. He often took us sailing. Mum was the first person in her family to study overseas, and used to regale us with tales of being stranded in Russia and India. When she was headed to the UK to do her PhD, she packed the whole family along and that was my first plane ride, at the age of 3. She would decide, on a whim, that we should drive to Port Dickson just to have ais kacang or authentic resthouse fare at Si Rusa Inn! After retirement, mum continued to travel regularly; she and her friends were among the first Malaysian tourists to Iran.

So your parents didn’t have any issues with your previous jobs?

AA: Not at first but after the bombing incident in Iraq – I was travelling with Dr Jemilah when our vehicles were hit – my mum began to worry. After I returned from Sudan, both she and her doctor told me that her health would not be able to handle her worries over my working in war-torn countries for too much or too long.

Now that you’re no longer travelling to war-torn countries for work, where do you go for leisure getaways? What’s your next destination?

AA: I have been to 49 countries so far, and make it a point to visit a new one each year. I was planning to visit Argentina next as I’ve never been to Latin America. Mum told me she had a bad feeling about it, it’s the first time she’s ever said something like that to me. So I’m still contemplating. I also travel around Malaysia regularly and have my eye on Tuba Island, in Langkawi.

Are you the kind of traveller who doesn’t start packing without a list, or more of a ‘throw everything into the luggage’ type?

AA: I usually decide at the last minute! I don’t make decisions ahead, decisions come to me. Like the time a friend was heading to Maldives with his family and I tagged along.

You’ve travelled on your own a lot and also with family or friends, which is more your style?

AA: I prefer to travel alone as I’m an introvert. I like to take my time to pause and reflect. I find that I see a lot more when I’m on my own as there are no distractions, and it’s easier to meet people.

Don’t you worry more about safety when travelling alone, or get lonely?

AA: You have to follow your instincts. When I was visiting Morocco for a week, I met a shopkeeper who offered to show me around. My instincts told me it was alright so I went along. It turned out to be a really great experience. Sure I get lonely at times, but thanks to data and Internet services, I still get to stay connected with friends and family.

AA: Road trips are one of my favourites as you can see more and be more impulsive. It’s especially ideal for discovering cottage industries and unearthing little-known gems. In Malaysia, the trunk roads are always interesting. In Johor, for example, I came across a kelong by chance and decided to take a boat there in the middle of the night and stay the night. That led to discovering the best dodol ever, near Tanjung Piai, and a privately-run Bugis museum.

Driving also means you can stop as and when you want – for roadside food stalls, for example. In Turkey, I hopped out to buy cherries; in Iran, for raw pistachios; in Bosnia, for wild strawberries.

Most important advice for road trippers:

AA: Bring wet wipes – I cannot emphasise this enough! And make sure to have enough petrol. I did a road trip in Mauritius and ran low on fuel, and now I can tell you exactly where all the island’s petrol stations are located!

Has being a solo Muslim woman traveller ever posed any problems for you?

AA: Not generally, although there has been occasions.

I met a taxi driver in New York who gave me an aggressive lecture on being a Muslim, and there was a similar incident in London. It was scary but I willed myself to stay calm and eventually, they calmed down too.

I also see such encounters as opportunities to raise awareness and improve understanding on what being a Muslim is. In Afghanistan and Sudan, not everyone believed that I was a Muslim even though I wore a hijab. I had to recite Quranic verses in order to convince them. I realised that the difference was cultural rather than religious – in Malaysia, a hijab is typically taken as a sure sign of the woman being a Muslim.

I also met a man in Sri Lanka who did not believe I was Muslim when he heard that I have a ‘Christian’ name!

Your blog is called Travel & BE, what does the name represent?

AA: The idea that travel can empower you, especially as a woman. Through travel, you can be anything you want to be.When I travel to rough places, it made me realise I am capable of doing many different things and can survive difficult situations. I’ve been shouted at by a leader of a rebel group in South Sudan, for instance, so what’s the big deal if any of my bosses were to shout at me?

What would you like readers to take away from your blog?

AA: No matter how busy you are, make time to get away once in a while. If you go with an open mind, even a one-day trip can be truly refreshing. Don’t be afraid of the unknown.

Interested to be a Zafigo Partner Blogger? We want to work with bloggers who share our vision of making travel safer, better and more interesting for women around the world. If you think you fit the bill, drop us a note at [email protected] . 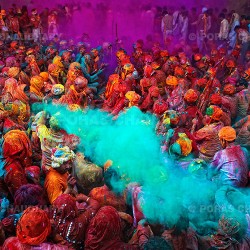 
18 Gorgeous Photos Of Holi That Will Mak...