From Zafigo Tips
The Malaysian government has allowed for domestic travel to begin again starting 10 June 2020. We urge you to maintain social distancing, upkeep your personal hygiene, and adhere to all SOPs imposed to prevent the spread of COVID-19. If you’re still not sure about travelling during this time, we hope you keep Zafigo as a source of inspiration for your future travels.

I was not looking forward to going to Delhi. In preparation for the trip, I had even memorised an entire sheet of scams:

Beware of friendly men in Connaught who want to practice English;
Beware of men in official uniforms saying the train station has closed or burned down, and try to lead you somewhere else;
Beware if poop ends up on your shoes and a shoe shiner magically appears;
Never let your taxi or rickshaw driver bring his friend.

I really did not want faeces on my shoes and get ripped off at the same time! But these are minor annoyances compared to the daily, horrific violence that happens to women in India. The publicised gang-rape and death of an Indian woman in 2012, and the gang-rape of a Danish tourist in 2014, had me wishing I could bypass Delhi altogether. Then, the day before I departed McLeodganj, an Israeli female tourist was gang-raped in a moving car.

Before it gets too heavy, let me back up a bit here.

It was my last day in McLeodganj, India, where I had spent three months volunteering as an English tutor. I spun the prayer wheels one last time, ate at my favourite restaurant, and said goodbye to the young Nepalese guy on my way home. He was seated on a motorcycle outside the motorcycle shop where he and his friend worked. I’m not sure what they did, but it involved a lot of banging. Each time I walked by they would be sitting on the ground banging, and yell, “Hello ma’am!” with giant grins on their faces.

Upon returning to the apartment, I saw Da – my landlady – who said she would call a taxi for me. It was a gorgeous day and I could have wheeled my suitcase down the road, but I obliged and let her order it. We stood waiting with her six-year-old daughter, her nephew, and two dogs.

When the taxi came, I turned to say goodbye. That’s when Da pulled a katak – a Tibetan prayer scarf – from her pocket! This time I was familiar with the procedure and bowed my head with my hands in prayer while she secured it around my neck. Ever the protective mother, she draped me in a blessing for safe travels, but vocalised her exhortation just to make sure I understood.

“Be careful in Delhi! Make friends with Tibetans on your bus, and tell them to escort you to your hotel. Don’t walk alone!” And with that confidence booster, I left the monsoon and the monkeys that roamed the streets of McLoedganj. 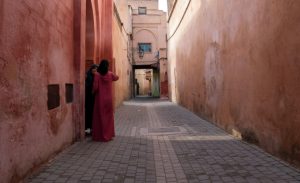 Clearly, travelling as a woman – especially alone – can be very challenging. But that doesn’t mean you shouldn’t do it: The Challenges & Perks Of Travelling As A Woman

I arrived safely into Majnu-ka-tila, the enclave for the Tibetan refugee community in northern Delhi. I had been sitting in a café when I overheard a woman discuss how she ordered a taxi through a guesthouse to pick her up from the airport. I would have to get a taxi to the airport in a couple of days, and had already ruled out walking to the main road to hail a taxi on my own. I had no desire to face a gang of aggressive male drivers, all shouting at me, tugging on my suitcase, and fighting over who would get my fare. Even after three months in India, I was still intimidated by Indian men, especially when they outnumbered me, and shouted at me, which constituted the majority of our interactions.

I considered using Uber, since the drivers were tracked by GPS. It could be safer, but it wasn’t fool-proof. Two years ago, a woman was raped by an Uber driver in Delhi who did not have a GPS, and who had not been properly vetted by Uber. I was racking my brain on how to get to the airport not driven by a man. There was the option to take the metro, but if I got lost, the last thing to do would be lugging my suitcase around asking for directions. That’s how the Danish tourist got raped; she got lost and asked for directions.

After torturing my brain for hours, I still had no good ideas of my own. I approached the table where the woman was sitting to ask where she ordered her taxi. I figured that guesthouses must use the same drivers, and so there must be some trustworthiness. Plus, she had lived to tell about it, so there was that. She invited me to join her at her table.

She asked me, “Did you hear about the Israeli tourist who was raped?”

“Yes,” I nodded, “the tourist thought it was a group taxi and got in, but it wasn’t. There were six men in the vehicle.” The men raped her for hours before dumping her out on a random road.

There was a heavy silence. We too, were women travelling alone in India. We too, needed taxis and busses, and whether we liked it or not – the help of Indian men. It turned out that the lady I was speaking with, Sani, was also from Israel, on a two-month holiday. It was her first solo international trip. Having spent a day in Majnu-ka-tila, she had plans to go further north. She would be getting the overnight bus that evening.

Sani said, “I’m stopping for a couple of days at a holy community before continuing on. I think it will be good to get grounded.” I agreed. Whatever it takes, getting grounded in a holy community, praying, receiving a katak – taking blessings for our onward journeys. Sometimes it was the only way to continue in the face of insane conditions.

I had been instructed to wait in the hotel lobby. I clasped my hands together – unconsciously – in a prayer symbol. My palms were sweaty. I checked my phone to make sure the batteries were charged. A skinny Indian man entered the lobby – my taxi driver. He looked at me, and without saying a word, grabbed my suitcase. I followed behind. We walked to a parking lot where his taxi was parked. While he loaded my suitcase in the trunk, I helped myself into the back seat.

The driver reversed out of the parking space, and just as we started to creep forward, a random Indian man jumped into the front seat. Literally, just swung open the door and got in. The driver didn’t raise an eyebrow, didn’t miss a beat, and stepped on the gas. Immediately, all the hairs on my neck raised and all I could hear was the warning, “Never let the taxi driver bring a friend!”

My heart pounded furiously. “Who’s this?” I barked, which was completely out of my comfort zone or customary tone of voice.

“My friend,” said the driver.
“Why is he in here? Why is he coming?” my voice drilled out like bullets.
“We are going to the airport,” he said, and continued heading for the parking lot exit.
“I know we are going to the airport! What is he doing in here? Why is he coming?” I demanded.
The two men looked at each other and the driver said, “He wants to be with the air conditioning.”
“No!” I shouted, “I paid for this taxi, only I’m allowed to ride!” My heartfelt as if it would explode. I was on a hair-trigger.

The taxi driver finally stopped the car; his Indian friend got out, and we departed.

My hands were shaking. Who knows if it was true, that it was simply an innocent intent of wanting to escape the torrid heat and sit in an air-conditioned car for two hours. But I could not risk it. I could not, knowing what I knew. I felt Da’s katak draped around me. It gave me strength. I turned on my GPS loud and clear, so my driver knew I was following the route.

India had forced me to become assertive and aggressive to levels far beyond my conditioning. I had to mirror the aggression aimed at me, but channel the energy into clear communication, stating and defending my boundaries without apologies. In this way, India had forced me to become more honest. I had been raised with the conditioning of being a polite, Asian woman who put the comfort and safety of others ahead of her own.

It led to a lifetime of giving dishonest yeses, and then blaming others and feeling like a victim. Some people say Asians are two-faced, but this is due to a rule of ‘saving face’ – of never causing someone else to be ashamed or embarrassed. While this may have come from good intentions, the result is that individuals cannot say what they really mean and thus, speak from ‘two faces’. 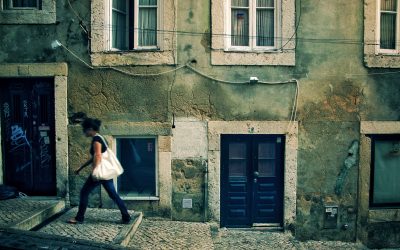 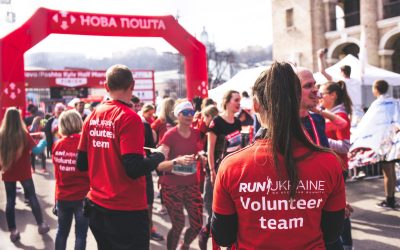 5 Ways To Connect With People & Communities When Travelling The World

The 10 Most Useful Languages To Know When Travelling 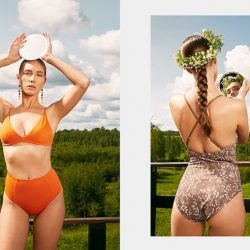 
8 Malaysian Swimwear Brands To Buy From For Your Next Beach ...