Celebrated widely across South East Asia, the Water Festival goes by many monikers. Held mid-April, the Water Festival is actually a celebration of the Buddhist New Year and is called ‘Songkran’ in Thailand or ‘Chaul Chnam Thmey’ in Cambodia. Similar to the Indian festival of Holi, the Buddhist New Year too symbolises the start of a new harvest season. People across the sub-continent start the New Year festivities by paying homage to the Buddha and hoping for a good harvest year. Sprinkling water on statues of the Buddha and on each other has long been a part of the Buddhist New Year traditions. In the past few years however, this custom has evolved to a major community event, with people out on the streets splashing each other with copious amounts of water to wash out the past and start afresh. These days, celebrations have grown exponentially and now attract a wide number of tourists who flock to these countries to experience and be a part of the unique festival. So here’s a whirlwind trip across Asia, where you’ll find the best spots to experience the Water Festival for yourself:

While Bangkok and Pattaya will see the most happening parties, Songkran celebrations in Chang Mai offer a combination of laidback Thai culture together with massive parties, giving travellers a chance to witness more traditional Songkran practices. Not to mention, Chang Mai sees the wettest celebrations in all of Thailand, so get to ready to be drenched! You can start your day by rising early and joining the monks in the procession to Wat Pra Singh which is the main Buddhist temple in Chang Mai. Reward yourself with a few serene moments as the monks perform the New Year ritual of bathing the Buddha statue, building sand pagodas and distributing alms to the needy.

As the sun rises and begins to shine bright, brace yourself to be splashed with water straight out of buckets – which is Chang Mai’s weapon of choice for throwing water. You’ll find the biggest and the wettest party at Tha Pae Gate on the eastern side of the city, where along with a lot of splishing  and splashing, you will also find food markets and live performances that add more jazz to the party. To make the most out of the celebrations read our Songkran Survival Guide.

Thingyan, or the Burmese New Year, is considered to be the country’s most important holiday. The biggest celebration takes place in Yangon itself, at Burma’s most religious site – the Shwedagon Paya (also known as the Golden Pagoda). Accompanied by the resonating tinkle of temple bells and whiffs of burning incense, you can watch the monks partake in religious customs as hundreds of ladies sweep the pagoda’s floor to be rid of the bad and bring in the good. We also suggest indulging in some Mont Lone Yay Paw (sticky rice dumplings with palm sugar), a treat synonymous with Thingyan.

Water splashing is a revered part of the festivities here, and on the third day of Thingyan, people splash each other with water from water guns, buckets and even garden hoses grooving to the music from the many pandals (stages) set up around the city.

As opposed to the neighbouring country of Thailand where backpackers visit in droves to celebrate Songkran and enjoy a few days of street parties, things in Cambodia are done in a slightly different manner. Although water-splashing forms a part of the festival, it is not the predominant activity in Cambodia. You can witness a lot of tradition and culture around Siem Reap, including prayers at Buddhist temples, offering elders perfumed water and building sand pagodas with wishes for luck, peace and prosperity.

That said, Chaul Chanm Thmey or Khmer New Year – the Cambodian New Year – is still a fun and exhilarating time to visit Cambodia, especially the Angkor Wat temple complex where celebrations reach their peak. Throughout the festivities, traditional games and sports take place on the temple’s grounds like ball games, tug of war, giant chess and buffalo racing. If you’re not up for playing games, you can watch traditional dance performances instead, and bakotar, a medieval martial arts practice. At night, the temple complex is lit up, with food stalls and concert stages replacing the games area. Here, you can catch gigs of various genres, from local pop music to heavy metal.

Pi Mai, or the Laotian New Year, is the most celebrated festival in the country with the best festivities found in Luang Prabang. Here, the celebrations take place for nearly a week compared to the mandatory three-day event. The highlight of the Water Festival here is the grand procession, where the revered image of Prabang Buddha is carried through the streets as people pour scented water over the Buddha to wash away impurities. The statue is then returned to Wat Xieng Thong, Luang Prabang’s main Buddhist temple, on New Year’s day. This procession is followed by another called vien tien – a candle light procession that marks the end of the festival.

Along with ancient customs, the entire city is brought to life during Pi Mai with many markets, parades, beauty pageants and of course, a lot of water splashing. Along with pouring buckets of water on each other to ward off misfortunes, the locals also paint their faces with charcoal, wheat and red paint to give the celebrations that festive vibe.

While a majority of the country gears up for the Dragon Boat Races, the Dai ethnic community in China, gets ready to ring in the Spring New Year with an annual water-splashing festival called Poshuijie. The Dai group is an ethnic minority who live in the Xishuangbanna Prefecture, and Yunnan is where the main celebrations are held. Similar to its neighbour Thailand, the festival is held for a period of three days. What makes Poshuijie unique is the Dragon Boat Race that takes place on the first day of the festival along the banks of the Lancang River, complete with colourful boats, lanterns and costumes. At night, the entire river is lit up with hundreds of lanterns, which is deemed the Chinese way of ringing out the old year.

The last day of the event begins with morning chants at the temples, followed by a day of splashing water and a whole lot of fun. This is the time people flock to the streets with pots, pans, bottles, anything they can get their hands on, to uninhibitedly shower each other with water and good will for the year ahead. Irrespective of where you go, these unique celebrations will surely help you connect better to the locals and make more of your travels amidst all the fun and the frolick! 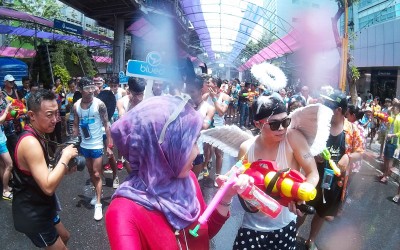 Songkran Is More Fun With Water Guns, Foam, And Angels 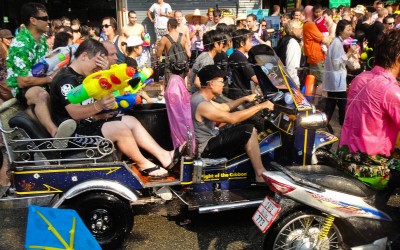 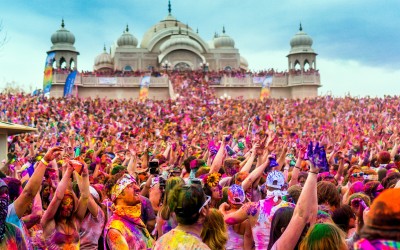 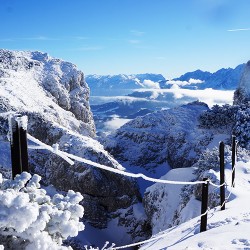 
That Winter In Salzburg