In July this year, Faizah Shaheen, 27, boarded a Thomson Airway flight home to England after her honeymoon in Turkey. During the flight, Shaheen started reading a book on Syrian culture. The book, Syria Speaks: Art and Culture from the Frontline is an award-winning book featuring a collection of literature and art from Syrian authors and artists. Upon landing in Doncaster Airport, Shaheen was arrested by South Yorkshire Police under the UK Terrorism Act. Her crime? A cabin crew had spotted her reading the book on Syria.

“I was completely innocent – I was made to feel like a culprit… I couldn’t understand how reading a book could cause people to suspect me like this,” said Shaheen. Police later learnt that she works with England’s National Health Service to prevent teenage mental health patients from becoming radicalised.

In March, Hasan Aldewachi was asked to leave the plane after he was seen sending a text message in Arabic. The Guardian reported that his phone was confiscated and he was left at the airport with no onward ticket or refund. The text message was to his wife informing her that his flight to Gatwick was delayed.

And then there was Mehary Yemane-Tesfagiorgis, a Londoner of Eritrean descent, who armed police escorted off another Gatwick-bound easyJet flight after passengers told the crew that she didn’t feel safe with him onboard.

What do Shaheen, Aldewachi and Yemane-Tesfagiorgis have one thing in common? They were flying while Muslim.

Post Sept 11, the expression ‘flying while Muslim’ or ‘Muslim while flying’ has been so widely used that it received its own Wikipedia page. It describes the discrimination Muslim passengers face on airplanes, an issue that have steadily grown throughout the years. It doesn’t affect travellers within Asia as much, but Muslims traveling to Europe and the Americas are facing increasing difficulties.

According to Yasmin Ahmed of The Independent, racial profiling have created an unusually stressful experience for Muslims worldwide. Airlines have found any excuse to kick anyone who appears to be Arab and Muslim off their flights since 9/11. At airport check-ins, Muslim passengers, especially those who visibly wear their religion proudly, are often subjected to ‘random checks’, extra questioning and formal searches.

While preparing for the Rio Olympics, Ibtihaj Muhammad, the first US Olympian to wear a hijab, said one of her concerns was not about the competition but about flying. “When Muslims were being kicked off flights in the middle of Olympic qualifiers that was a real worry – am I going to be allowed to board my flight to make it to my Olympic qualifier?” Muhammad tells The National.

Flying while Muslim was first brought to media attention in 2006. Six Muslim imams attending a Minneapolis conference of the North American Imams Federation were removed from a US Airways flight and subsequently detained for allegedly “unsettling behaviour” which included praying at the gate. The imams were later released after several hours of questioning.

Fast forward to 2016, the United Arab Emirates is advising its citizens to avoid wearing the country’s traditional dress while traveling abroad “in order to preserve their safety.”

In this New York Times interview, Cincinnati lawyer Roula Allouch shares a deeper insight into the issue of flying while Muslim. Allouch is also the chairwoman of the national board of directors of the Council on American-Islamic Relations, one of the largest civil rights and advocacy groups for the American Muslim community:

New York Times: The term “flying while Muslim,” a variation of the expression “driving while black,” implies that Muslims are hassled during air travel because of their religion or ethnicity. Is this a major concern?

Roula Allouch: Our main concerns during this time of heightened Islamophobia are mosque attacks, bullying against students and travelling — they’re equally discussed. More and more people are being deplaned because they’re Muslim. For instance, one student was asked to leave a flight because he was speaking Arabic. What seems to be happening frequently is if another passenger on the plane has a complaint, the person they’re complaining about is asked to deboard. We’re (Untied States of America) a country that operates with civil rights. It’s very arbitrary and very troubling.

NYT: You wear a hijab and fly often for work. Do you feel you’re treated differently?

RA: It’s one of the most subtle things, but it stays with you. I feel people’s tension. When I’m walking down the aisle and people look up, they give a different expression than when it’s another person. There are people who give me a hard, strong stare and a stern look. But there also are people who go out of their way to give me a smile.

NYT: Have you changed any of your behaviors?

RA: In the past year, I have because I’m worried about perceptions. For instance I’m mindful of when I speak Arabic. Or [when] I was late for a connection and was running through O’Hare — try “running through airport while Muslim” — and people looked at me noticeably differently than the other woman making the same connection. Some actually stopped in their tracks.

NYT: In light of the bombings in New York and New Jersey, and the man charged with the attacks whose parents are immigrants from Afghanistan, do you anticipate that Muslims will be treated even more suspiciously?

RA: We certainly see an increase in attacks against Muslims following such tragic events, and I’d imagine we may likewise see more incidents of Muslims being removed from flights. From my perspective, the challenges in flying while being identifiable as Muslim these days are more related to the hate and rhetoric being spewed against Muslims than individual acts. The airline industry has to do a better job of protecting its customers.

In his essay in The Good Immigrant, British actor Riz Ahmed shares this sobering anecdote of being typecast as a terrorist: “As my acting career developed, I was no longer cast as a radical Muslim – except at the airport… I have had my films quoted back at me by someone rifling through my underpants, and been asked for selfies by someone swabbing me for explosives.”

“The last [security staff] who searched me, a young Muslim boy with an immaculate line-beard and goatee, was particularly apologetic. “Sorry bro. If it makes you feel any better, they search me before I fly too.” 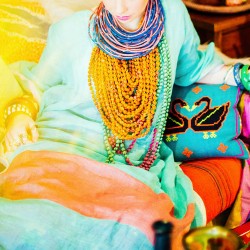 
Unusual Souvenirs From India You Should ...