Being a solo woman traveller anywhere in the world comes with its quirks. Every country has certain values and expectations about how women should act, dress and speak. South Korea is no exception. I’m currently living in Seoul for a semester abroad at Kyung Hee University, but the majority of my education has come from outside of the classroom.

Short is fine, low is not

The first thing I noticed about Korean females was how high the neckline of their shirts is. Spaghetti-strap summer dresses are worn over T-shirts. Oversized sweaters and billowy blouses are everywhere, even in the smoggy heat of late August. Something told me that this is more than a mere fashion trend, and I’m right.

In Korea, showing the collarbone is considered too sexy, because the female chest is seen as being distinctly different from the male chest. However, the shortest shorts, skirts and dresses are acceptable. Another Korean fashion style (and my favourite) is couples who are dressed match, girlfriend and boyfriend wearing the same shirts, sweaters and colour of trousers to openly show that they are together.

I try to dress respectfully, but I don’t always succeed; most of my shirts, which I brought from home, show my collarbone. I have definitely received a few harsh stares from the older generations while riding the subway. I don’t have the typical tiny Korean frame, and Korea has a ‘one-size fits all’ culture. If you find a store with small, medium and large options, you’re probably in H&M or a tourist area, such as Itaewon. And unfortunately, cute Korean boutiques rarely allow you to try on clothes in the store. Buying clothes here is thus a struggle for me.

In Korea, being beautiful is extremely important. If you hope to land a job or find a romantic partner, you have to be attractive. Even men use beauty products, including specialty male make-up. Rather than encouraging diversity, cookie-cutter conformity is desired, and plastic surgery is common. Whether it’s an eye lift as a ‘sweet 16’ birthday gift or a ‘vacation’ that results in a new look, changes that make the nose higher, eyes wider or chin more V-shaped are praised.

As a tall white female in Korea, I get stared at a lot. Korean’s aren’t afraid to comment on your appearance, whether it’s because you aren’t wearing make-up or they think your outfit is unflattering. I’ve never been the type of girl to spend half an hour cleansing my face at night, but I’ve totally fallen for the 10-step Korean beauty routine. It sounds ridiculous, but pampering my skin before I go to sleep is my new favourite way to practise self-love.

This is definitely the most difficult part about living in Korea as a foreign female. There are a lot of differences when it comes to ‘doing your business’ in this country. For starters, toilet paper goes in the garbage can, not in the toilet. (Yeah, I think it’s kind of gross).

While there are still some squat toilets around, you won’t be hard-pressed to find a Western toilet, especially in Seoul. Some toilets look like RoboToilets from the future, with an assortment of buttons to spray your bottom, dry yourself or play music, depending on your preference.

Public toilets in subway stations are very clean (and they’re free to use, unlike in other parts of the world). Most restaurants share their toilet with neighbouring businesses, so it is often located outside or up a flight of stairs. The entire bathroom in my dorm room functions as my shower. There’s a shower nozzle connected to the tap faucet, hanging above the sink. When I shower, I have to close the bathroom door and remove anything I don’t want to get wet. The toilet, walls and floor always end up soaked.

While things are certainly different in Seoul compared to life back home in Canada, they are not necessarily better or worse. I am getting used to eating with flat metal chopsticks, finding my way around the metro, and spending more time (and money) than ever before moisturising my skin. As a foreign female, I find Seoul to be one of the safest, liveliest and most culturally-intriguing places I’ve ever lived. Now if only I can find collarbone-covering shirts my size.

Alison Karlene Hodgins
Alison is a wandering travel writer currently studying journalism in Seoul. You can find her doing yoga at the top of a mountain or buried in a book at a quirky coffee shop. She blogs about her travels at aroundtheworldwithalison.com
W 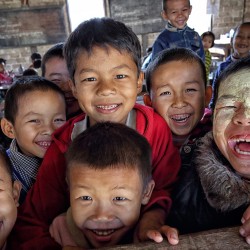 
These Are The Most Generous Countries In...