Still in its infancy yet a force to be reckoned with, female bikers on big motorcycles are blazing the trail for a new form of travel among women. Paving the way is California native Jaime Dempsey, who brought not only her bike but also her gutsiness across Asia for History Channel’s latest travel show, Ride N’ Seek.

Now in its fourth season, Ride N’ Seek is not your typical travel show but a motorcycle travel documentary that follows Jaime, a veteran biker, on an epic road trip through Asia. In Season 1, Jamie rode her Harley-Davidson Forty Eight through East Malaysia and Brunei. This season, the bubbly host will take viewers on a journey through the 7,107 islands of the Philippines. Whether on a Harley or Ducati, travelling on a motorcycle affords an easy mobility that has allowed her to visit places that tourists and even locals have ever been.

The sight of a woman travelling on big bikes is bound to raise some eyebrows, especially in Asia. We caught up with Jaime after her whirlwind tour of Philippines to understand the joys of motorcycle travel, the challenges, and what biking means to her and other female bikers.

What’s the difference between travelling on a motorbike and travelling the normal way?

Jamie Dempsey: On a bike you’re immersed in the environment, so you’re feeling every bit of the weather – the sun, the heat, the rain. You’re also getting all the smells of the environment, you’re feeling the wind rush past your whole body… it’s just much more exhilarating and you feel much more in touch with your surroundings. You also feel the motor, the engine of the bike and every bump on the road. It’s just, I don’t know, a great feeling. You’re also in your head, you’re inside the helmet and you’re by yourself, so it’s also a little therapeutic for me. You really have to try it to really know that sense of freedom and independence that riding gives you.

Season 1 of ‘Ride N’ Seek: Borneo’ was your first time riding in Asia. How was it?

JD: I was very excited but also a little nervous because I have been to Thailand and Indonesia, and seen how people drive and ride on the road there. I wondered if I was going to be able to handle it. It ended up being alright, I just jumped right in and became like a local!

What was the hardest thing about travelling through South East Asia on a bike?

JD: Getting used to the heat, because I was out in the elements all the time. You’re not riding in a car with the air-conditioning on and sitting comfortably, you’re roughing it. The other thing is, I don’t like to ride in clothing that is not protective. I like to have my skin covered and be wearing boots, so I’m protecting myself from the sun. If I go down on the road, I like to make sure that my skin is safe. So it’s a bit of a challenge (to ride in this weather), because when you get off the bike, it’s really hot, especially when you’re filming. I had to get used to that but I learned that you just have to force yourself to drink a ton of water and you’ll be okay.

What’s the biggest difference between riding in Asia versus the USA?

JD: Traffic can be really nuts, especially in the Philippines. There are also a lot more motorbikes on the road that I’m used to. Where I live, there are more cars than bikes. Over here, there are a lot of bikes living in between the cars and you’re trying to manoeuvre in very tight spaces. I feel like your skill level goes up a notch when you’re riding in Asia because you have to be a little quicker in thinking and reacting.

What has been your most memorable experience so far?

JD: There were definitely some challenges when I was in Borneo. I had never really been off-roading until then and I was riding this bike that didn’t have any dirt tires. I got on this trail going into the Maliau Basin, and it got really muddy and slippery. I fell down a bunch of times and it was the first time I had fallen off a motorcycle that way.

In the Philippines, I was on a tricycle for the very first time and we did some river crossing, which was really fun. Visiting Kalinga, heading into the mountains and seeing the rice terraces and the view was another highlight. I biked through so many different types of terrain, which was really cool.

A woman travelling on a big bike is not common in this part of the world. How did locals react when they saw you biking through their towns?

JD: They got really excited when they saw me! Among people who ride bikes, we have a certain kind of camaraderie… we share a love for motorcycles, so it didn’t matter to a lot of them that I’m a woman. They were excited that I was also in love with motorcycles and we had that in common, so we would talk about our bikes and the trips we’ve been on. For the most part, people just really loved it.

People who don’t ride would ask me, “Aren’t you scared?” or “What did your family say?”. I’d tell them that it’s a bit scary at first but you get used to it.

Did you meet a lot of women who also ride and were interested in riding?

JD: Yeah, I did actually. I did a couple of meet-and-greets along the way, and I was introduced to a couple of female bikers in Manila. On the road, I have encountered women on Harleys and all kinds of different bikes. I know that in the USA and Europe, the community of women riders is growing rapidly. As I ride on the street, I am seeing more ponytails on the back of helmets.

It’s really exciting to see this kind of movement, of women empowerment where we’re not afraid to seek some thrills and new experiences and adventure. Women are taking hold of their independence and strength, and showcasing it in a new way. We want to be equal at work, as voters, and now we want to be equal in adventure as well. For me, that’s really important that women feel strong enough to be able to go out on their own and have new experiences without being afraid. I think that the show has inspired other women to get on two wheels and not be afraid to explore places that way, so I’m happy to share my passion and inspire other women to do it.

That’s beautiful. When you were traveling through Asia, especially the more conservative villages where women are not as empowered, how did they react towards you?

JD: I think they were mostly just curious. It’s something they’ve never seen before, especially since I’m covered in tattoos and I’m on two wheels. I think maybe it’s just so far from the norm that they’re intrigued and curious. In turn, I’m also not used to their culture and way of life, so our curiosity about each other leads us to becoming quick friends; we ask each other a lot of questions.

Would you recommend motorcycle travel to other women?

JD: Oh, absolutely! It’s a great way to travel and be more immersed in the environment. The way I began biking was by taking a safety course and finding a bike that I was comfortable on. In the beginning, I practised on quiet roads close to home. The only way to become comfortable on a bike is to ride it, and to ride it often. I recommend sticking with your comfort level and then when you get there, explore a little further away from home. 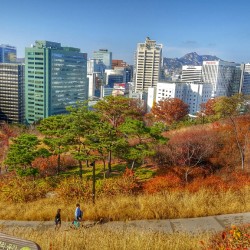 
21 Photos of Seoul During Autumn That Wi...