The city of terracotta warriors, archaeological sites, and Muslim-Chinese food, Xi’an is one of the most important cities in China, and remains an important industrial hub in today’s modern day era. Most tourists flock to Xi’an to take in the awe that is the Terracotta Army. Row after row of over 8,000 sculptures including soldiers, carriages, and horses dating back to 210-209 BCE. However, Xi’an’s real attraction is the food.

China may not be the most convenient place for Muslim travellers. But If you’re looking to experience a halal taste of the region, give Xi’an a try. Home to over 30,000 Muslims, majority of which stem from the Hui Minority, the Muslim Quarter in Xi’an came about because of Muslim merchants.

While the majority of China are not fans of lamb and mutton, the people of Xi’an can’t do without it. The gaminess of the meat goes very well with the cuisine here, which incorporates plenty of chili oil, black vinegar, and spices.

You’ll also find that noodles and bread are more of a staple than rice here, likely due to the surrounding dry, mountainous terrain. Not just any noodle though; but long, wide, and incredibly doughy ones made fresh. 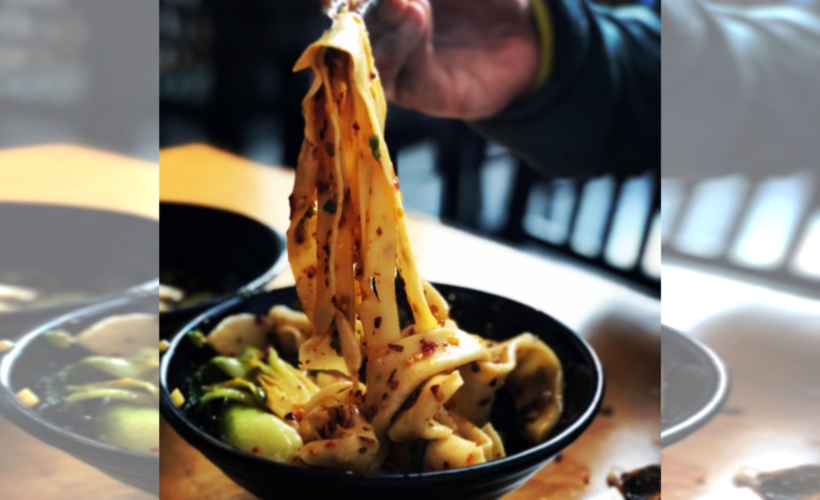 This dish is a true specialty of Shaanxi Province, they’re hard to find anywhere else in China. Though not as popular as they used to be, you’ll still find them in along Xi’an’s touristy Muslim Street.

If you do find yourself seated by the roadside waiting for a bowl, you’ll see that the preparation for biangbiang noodles is both troublesome and tiring. The dough is kneaded and slapped against the table multiple times in order to create that perfect chewy bite, thus owing to their name, which sounds similar to the noise made from the dough slapping against the table. Famous for being as long and wide as a belt, they’re topped with chili powder and spring onions, followed by hot oil ladled on top. 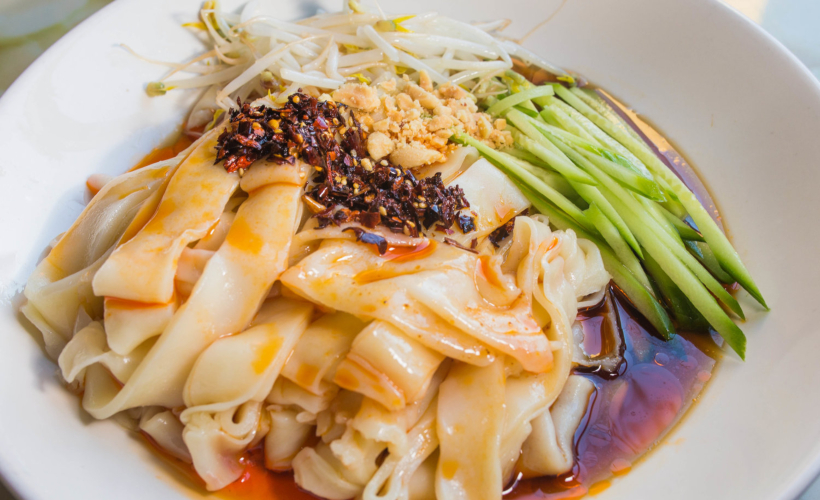 Liangpi is one of Xi’an’s most popular dishes. It’s rather widespread throughout the country and is the famous cousin of biangbiang. They may look like your average flat white noodle, but what makes liangpi different is the way it’s made.

Typically, noodles are made by rolling out dough and slicing it into strips. The laborious process of making liangpi starts off by making a simple soft dough of flour and water and then rinsing it in a bowl of water to remove the gluten from the starch. The leftover starchy water is then left to rest until the starch precipitates and separates from the extra water. Finally, it’s steamed into thin pancakes and cut into noodle-like lengths.

Like most good dishes in Xi’an, it’s served dressed in a sauce of black vinegar, minced garlic, and red-hot chili oil. Julienned cucumber and bean sprouts complete the dish. 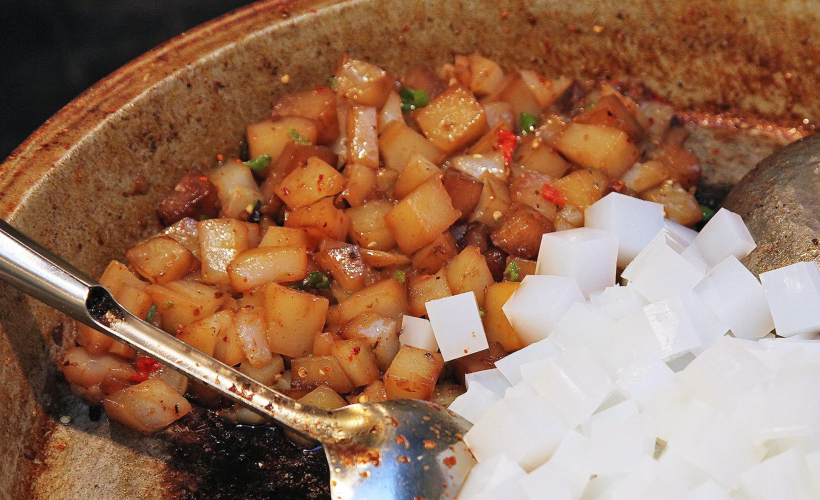 Similar to liangpi, liangfen are jelly-like cubes made of mung bean or pea starch. Savoury and not sweet, they have exactly the sort of bouncy, slippery texture you’d imagine. In Sichuan, liangfen is cut into strips and served cold with a dressing of soy sauce, mashed garlic, black vinegar, and heaps of chili oil. The ingredients for this dressing varies according to each region or restaurant you go to. In Xi’an, this dish is usually served as a street food that’s been chopped up into cubes and stir fried with dark soy sauce to add colour and lightly caramelise it. 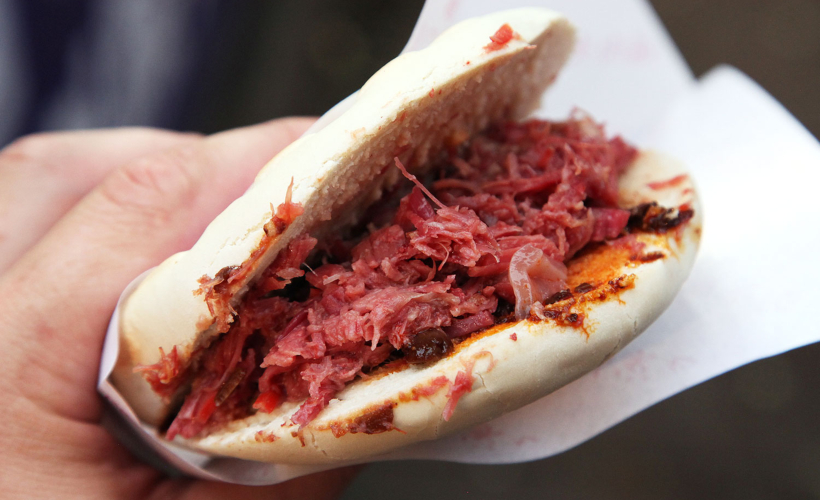 Rou jia mo is to the people of Xi’an what sloppy joes are to Americans. Think juicy shredded meat with the aroma of a trillion spices, dripping with sauce, stuffed into a flatbread. This mo is a type of flatbread that you’ll find used in myriad dishes across China. Also called ‘mantau’, some places bake them, some fry them over a griddle, and some steam them for a softer, lighter texture. Originally from Shaanxi, people all over the region now enjoy this but generally with marbled pork. In Xi’an, you’ll only find a halal version of this dish with beef or lamb. 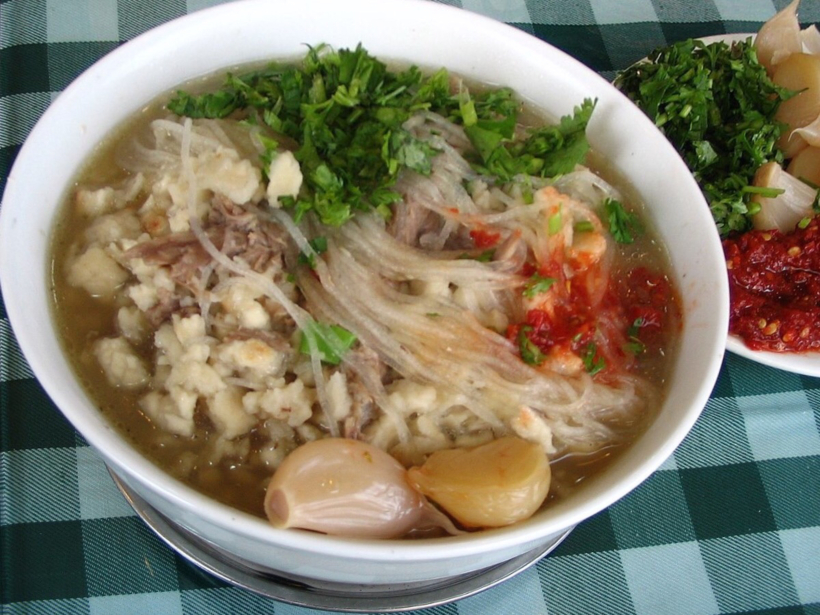 The dish most synonymous with Xi’an cuisine is probably lamb paomo (or ‘yang rou paomo’). Patrons are given the the same unleavened flatbread used in rou jia mo in a bowl. You’re then supposed to tear the bread into itty bitty pieces. The smaller the bits, the tastier the dish, as more soup can be absorbed. Your bowl will then be taken back into the kitchen where it’s stirred into a pot of divine, savoury lamb stew served with a side of sweet pickled whole garlic cloves.

Lamb paomo presumably originates from the founding emperor of the Song dynasty who had only two pieces of dry, hard bread while on a long journey. Finding himself in a stall selling lamb soup, he tore the bread into pieces and soaked them into the soup to improve the texture. 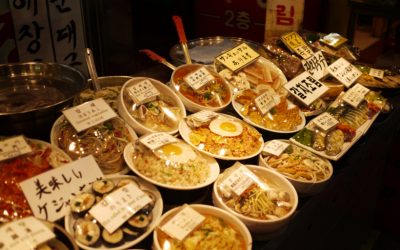 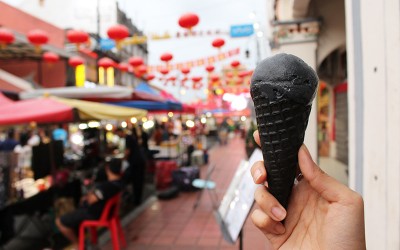 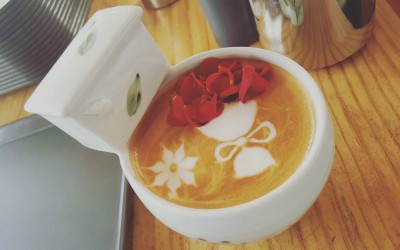 Shen Lee Ng
A world record holding powerlifter, Shen is passionate in encouraging women to be more in tune with their bodies and to regain their confidence through fitness. She currently works as a membership consultant, freelance writer and is in the works of launching her own startup before she embarks on the treacherous journey that is college.
TAGS:
Destination InspirationChinaFoodXi'an
Share This Story
0
Shares
Share Tweet Message 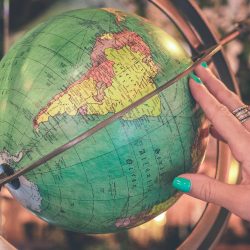 
Visa 101: What Are The Different Types Of Visas