I sometimes think that my favourite book is always the one I’ve just finished. Over the years, I’ve read so many books that it’s hard to remember which ones I liked above the others, so I tend to just remember the most recent ones. There’s also a much shorter list of books I hated, but I put those out of my mind as quickly as I can.

The following though is a list of my favourites for now and some from a little way back. Some may slip down the line after I’ve read a few more good ones.

The 2020 winner of the Women’s Fiction Prize. I never thought I’d like a book set in the 16th century, but this is so exquisitely written and features a very strong woman that I was immediately entranced. O’Farrell has successfully redeemed the name of William Shakespeare’s wife Ann Hathaway who has been maligned throughout history as a not very educated, social-climbing woman.

2. Where the Crawdads Sing by Delia Owens

I read as a writer and this book showed me that you should either be an expert in a subject or do a lot of research for your novel to truly sound authentic. I actually listened to the audiobook, which was great because the lead character’s southern accent made it sound so genuine. I loved the surprise ending too.

3. The Dutch House by Ann Patchett

I’d never read Ann Patchett before, but I picked up this audiobook mainly because Tom Hanks was reading it. And he does a superb job, as if the book was written like a movie script. It’s a very American story about a family who lived in a beautiful old house, and it’s told by the son, but you become very invested in the characters and care a lot about what happens to them.

This won the US National Book Award for Fiction in 2020, and came just as I became interested in books by Asian-Americans. Charles Yu is basically scriptwriter, so he wrote this as if he was writing a script for a movie. But he cleverly highlights the problems for Asian actors in Hollywood, where they are so stereotyped that they can only hope to rise to being the Kungfu lead. It’s funny and sad at the same time.

Another audiobook which I chose because it’s actually read by the author. And it is just gorgeous. A young Vietnamese-American boy describes his life with his mother and grandmother after they become refugees in the US after the end of the Vietnam War. The boy’s gay, but he never comes out to his mother. The descriptions of his love for another boy are just so touching. I talk about it more in Episode 9 of our podcast, Busy Reading Books.

A post shared by Lauren ⋒ All the Lovely Lit (@allthelovelylit)

I loved her earlier book, Half of a Yellow Sun, which was very intense. But I also liked this one a lot because Chimamanda can actually be funny. She describes the lives of Nigerian immigrants in the US, from leaving a country where they never encountered racism to one where it’s full tilt everywhere. Beautiful, layered language.

Another book I read ages ago and is still my favourite among her books. It’s about immigrants in London, and although a lot of it is tragic, some of it is hilarious. For some reason, I remember her description of this group of young Muslim boys who called themselves KEVIN. I forget what it stands for except that the last two letters are for ‘Islamic Nation’.

During my student days, everybody read White Swans by Jung Chang, a horrific story of China during the Cultural Revolution. So I was thrilled to finally meet her at the Ubud Writers Festival in 2018. This was her latest book, and it is meticulously researched, which wasn’t easy because the Chinese government had not been pleased by White Swans and only allowed her to return for two weeks a year to visit her mother.

All her research for this book was done during those visits. But it is a fascinating account of a woman long maligned as a manipulator until Jung Chang discovered that she did a lot to modernise China, including by introducing railroads. If you’ve ever been to Beijing and gone to the Forbidden City, this has wonderful descriptions of life in the palace that most people would never have seen.

9. The Sabres of Paradise by Lesley Blanch

Here’s an odd one. I was given this book when my Dad was in hospital in 2007, but he had no mood to read, so I picked it up instead. It’s a historical account of Imam Shamyl, a Muslim chieftain in the Caucasus Mountains who was known as the Lion of Daghestan.

He led mountain tribes in the way against the Russians to preserve their independence, and their faith and gives an insight into the origins of the continuing conflict in Chechnya today. But it reads like an adventure novel including the kidnapping of his son by the Russians and the estrangement of the son after experiencing the easier life in Moscow compared to the harshness of the mountains. It takes patience to read it, not least because the typeface is tiny, but well worth it.

The title is taken from a Prince song which already made this book intriguing. I had to read this as part of my MA course and just loved it. It is a series of essays about different ways in which animals have famously interacted with humans, including Yuka, a 39,000-year old mummified woolly mammoth found in the Siberian permafrost to a gorilla who was able to ‘talk’ to a starling who was Mozart’s pet. And although it seems to be about animals, ultimately it is about us humans and how we regard these other living creatures that share our earth.

This is, of course, not an exhaustive list at all, because I’ve left out so many books by authors I love such as Jeanette Winterson, Barbara Kingsolver, Amitav Ghosh, Arundhati Roy, and more. But you can listen to me talking about all those on our podcast Busy Reading Books. 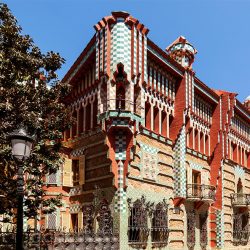