It’s a no brainer that first class plane tickets come with a huge price tag that only the ultra-rich can afford, it does cost more to provide what with luxurious amenities like bigger space and meals fit for a fine-dining restaurant. However, the full fare for first class plane tickets are often so exorbitant that it’s hard to believe that it cost that much to provide.

Here’s an example provided by One Mile At A Time reader Weymar who posed the question of why are first class plane tickets so expensive in the blog’s forum.

In his question, Weymar pointed out that even with the extra space and premiums, first class prices are too disproportionated compared to business and economy to justified it by its cost. Weymar writes:

“I’m going to use the example of the Houston-Moscow-Singapore which I bought a few weeks before they announced they would cancel the route because of low yields. Also, I’m not trying to do meticulous scientific research on this, only to get a general idea so my math isn’t going to be 100% accurate.

My ticket in economy for the whole itinerary was USD1,300, whereas first class was pricing out at over USD20,000. Where exactly does that extra USD18,700 go?”

“The biggest factor is space, the single most valuable thing on an airplane… [According to my calculations], a little more than four economy seats take up the same amount of space as a first class seat [on the Boeing 777 aircraft]. If ticket prices were based purely on space, the first class seat should cost roughly USD5,300.

Of course that’s not the only thing that goes into the price of a ticket. Catering, crew wages, and ground service also are factors, but I’d find it very hard to believe that those would cost an extra ~USD15,000 to provide.”

Weymar also pointed out that demand is also a factor as “prices of anything are almost always based on how much people are willing to pay for it, and not the cost of the components.” However, he noticed that many airlines are struggling to sell first class seats as many have eliminated it completely. On his Houston to Moscow flight, Weymar noted that the seats were not very full in economy or business, and that the first class cabin is presumably empty as well.

With supply exceeding the demand for first class cabins, why is it still so expensive?

In response to Weymar’s question, Lucky from One Mile At A Time gave 2 reasons to explain why first plane tickets are disproportionately and exorbitantly more expensive than business and economy:

“I recently spoke to an executive at a major airline about this, specifically mentioning how they very rarely discount their forward cabin. His response was essentially so that they don’t expect anyone to pay full fare. Rather they have such high fares so that they can be discounted.

Companies can get huge discounts on full fare ticket costs with a big enough contract. Some airlines, like British Airways, even have promotions offering “free” upgrades to first class when you’re paying for a full fare business class ticket.

So as backwards as it seems, airlines don’t actually intend for you to pay those prices. Rather they set the fares so high so they can discount them from there.

He acknowledged that they’re probably missing out on some high-end leisure travel with this practice, but think there’s more upside with the benefits they get through corporate travel.

Corporate contracts and incentives are at the heart of high first class pricing. Some companies have big contracts that get them upgraded or discounted first class fares, and that can still be very lucrative for airlines.”

It creates a sense of exclusivity

“By pricing first class airfare so high, airlines are creating a sense of exclusivity. When someone does sit in first class, they feel like they’re getting outsized value, whether in the form of an upgrade, reward, or discounted first class ticket. We all like to assume that everyone else in first class is paying the full fare, but chances are they aren’t.”

Lucky adds that airlines are now starting to offer huge discounts for first class fare after realising that leisure passengers are willing to pay if the deal is reasonable.

Ultimately, there is no one true determining factor of why plane tickets are priced and fluctuate the way they are. It is one of the very few industries where two people seating next to each other can pay two totally different price for the same product. The merits of airline inventory and revenue management strategies have long been debated, but thankfully for us, airlines are slowly but surely making changes for flying to be accessible to the everyday man.

Read the full article at One Mile At A Time. 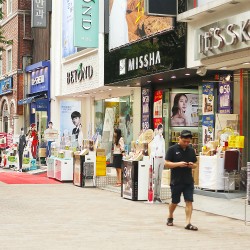 
10 Spots In Seoul To Shop For Everything...