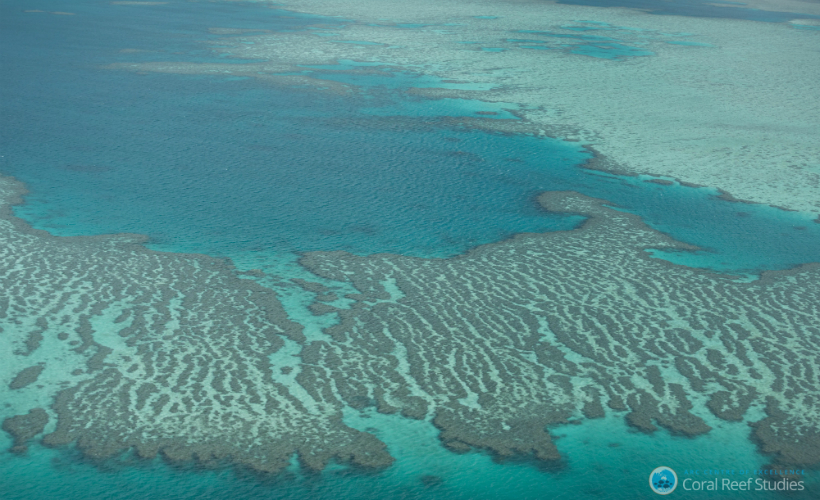 If you are a diver, the Great Barrier Reef is probably somewhere on your bucket list. How could it not be? It’s so huge you can see it from outer space; it’s one of the seven natural wonders of the world, and it is home to 10% of the world’s total fish species, but not for long.

Just as U.S. News & World Report names Australia’s Great Barrier Reef as the No. 1 Best Place to Visit in the World for 2016-2017, scientists have released heartbreaking images of a Great Barrier Reef that looks closer to death than alive.

Reports of the Great Barrier Reef slowing dying is not new but 2016 has been extremely damaging for the underwater ecosystem that brings in over two million visitors every year. A severe heatwave in Australia earlier this year led to the worst recorded coral bleaching event in the reef’s history. In March, more than 93% of the reefs turned white due to the record breaking warm ocean temperatures.

Scientists have recently returned to the oceans to reassess the reef health six months after the heatwave. They have bad news.

According to a press statement by the ARC Centre of Excellence for Coral Reef Studies, many of the bleached corals have died in the northern third of the reef. The large-scale devastation is made worse by disease infecting the damaged corals and by coral predators.

“Millions of corals in the north of the Great Barrier Reef died quickly from heat stress in March and since then, many more have died more slowly,” says Dr. Greg Torda whose team recently returned from re-surveying reefs near Lizard Island.

Close to Lizard Island, the amount of live corals covering the reef has fallen from 40% in March to under 5%. The situation is more hopeful in the central section of the reef where corals that were moderately bleached have nearly all regained their normal colour.

Scientists released footage showing the extent of the bleaching and the images are heartbreaking. The northern 700km of the reef experienced the most severe bleaching while the southern half were only lightly bleached and remain in good condition. You can see more videos and photos here.

What is coral bleaching?

Coral bleaching occurs when the corals experience extreme environmental stress due to an increase in temperature and light conditions. When the coral becomes stressed, it ejects algae from the tissues. These algae are the ingredients that give corals the vibrant colour, they also provide food for the coral in return for shelter in the coral tissues. As the symbiotic algae leaves the coral, the coral turns bone white.

Bleached corals can stay alive but will slowly starve to death without food from the algae. They can, however, regain their health if environmental conditions improve. If a coral doesn’t resettle an algae population quickly, it will be susceptible to diseases, destruction, and predators like snails.

Dying corals may regain their health, but it is a long and very slow process that will take years. Corals are the slowest growing species, adding between 5 to 23 millimeters per year to their length. Stretching 2,600 kilometres about the same area as Malaysia, the Great Barrier Reef is 20 million years in the making.

Thanks to the burning of fossil fuels, mining and ocean pollution, the corals are bleaching faster than they are recuperating.

Is the Great Barrier Reef dead?

Contrary to an obituary for the Great Barrier Reef published by Outside Magazine early October, the reef is not dead yet. The obituary horrified scientists who are worried that people will give up on protecting the reef once they assume it is past the point of recovery. Nonetheless, Outside Magazine highlights an urgent need for political intervention. 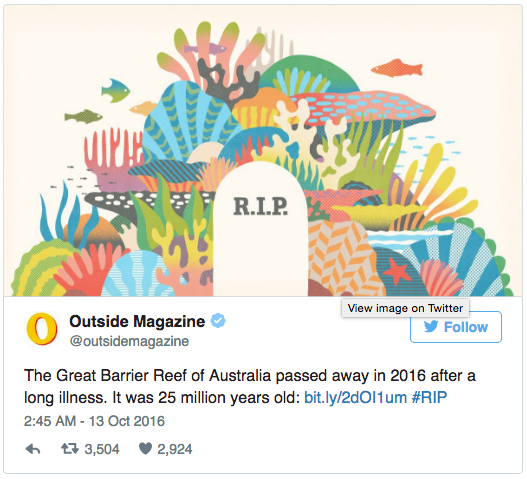 At the same time, scientists and environmental activists are worried that the government is not doing enough to retain Australia’s crown jewel. They are urging people to keep the conversation about the reef alive to put pressure on policy makers.

The Great Barrier Reef generates AU$5-6 billion per year and provides work for over 65,000 people. That is a lot of people left without jobs if things are left unabated.

“Unless we prevent the current disturbances happening, the reef is going to be changing dramatically in the composition and what it can support. You lose the corals, you’re going to lose a lot of the small fish, then there’s nothing for the bigger fish to feed on. It will have an impact on the whole ecosystem, and could put the fishing and tourism industries in danger. There are a whole lot of things that are going to change,” Dr Andrew Hoey of the Australian Research Council Centre of Excellence for Coral Reef Studies at James Cook University told The Independent.

The final death toll from this year’s devastating bleaching event will not be known until all surveys are completed in mid-November, but it is already clear that this event was much more severe than the two previous bleaching events in 2002 and 1998.

“If it [the reef] was a person, it would be on life support,” Professor Tim Flannery, Chief Climate Councillor of the Australian Climate Council said.

Is it too late for tourists to visit the Great Barrier Reef?

There is major concern for the long term future of the reef, but for now, it is still bringing in its fair share of tourism dollars. “The experience is still fantastic,” says Tourism operator John Rumney, “but tourists don’t know what they’re looking at. They don’t know what it should look like.”

Tourists from around the world have been flocking over to experience the reef before its glory is gone forever but ironically, over tourism can be even more damaging.

The Great Barrier Reef is not dead yet and it is not too late to save it especially if it is kept on the political agenda. Otherwise, it will be a sad day when a Unesco World Heritage Site becomes a note in the history books. 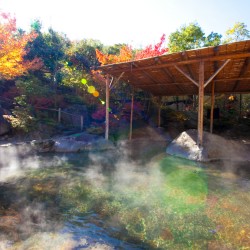