Unless you’ve been living under a Squirtle shell, you must have heard of the new Pokemon Go app that is taking the world by storm. It is a location-based smartphone game where you assume the role of a Pokemon Trainer to capture, battle and train virtual monsters that appear on your phone screen as though in the real world.

Pokemon Go is so popular that one New Zealand barista has quit his job to spend two months travelling his country hunting for Pokemon. 24-year-old Tom Currie said he was desperate for a break after six years of work, the game gave him the adventure that he was craving for.

Stuff NZ reported that the now full-time Pokemon Trainer has booked 20 bus trips from Cape Reinga (in the extreme north of New Zealand) to Invercargill (the southernmost city in the country). The app has taken him across the country to discover places he has never been. He traipsed through six South Island towns in the first week alone.

Currie may sound insane to most of us non-Pokemon Trainers (Pokemon Go is not available in Malaysia yet), but using Pokemon Go as a travel app could actually be a good idea.

Getting out of your comfort zone

Just look at photos of New York’s Central Park crowded with hundreds of Pokemon Go players. The augmented reality game is reportedly encouraging people to go outdoors, explore their surroundings and lead a more active lifestyle, albeit the fact that their eyes are glued to their phones. Somehow, chasing that rare Pikachu has the effect of making you more bold and adventurous in the places you go.

The game also has a knack of guiding you to landmarks and interesting points around a city. This is because checkpoints in the game called PokeStops are tied to actual landmarks.

“PokeStops are represented by real-life points of interests – churches, cafes, park benches, famous trees, you name it”, says Currie. ”As you’re walking around collecting Pokemon, all of these things get pointed out to you. You never would have looked at them otherwise.” Pokemon Trainer Joel Kramer chimes in, saying that he has learned more about Seattle’s landmark from Pokemon Go than he did from tourism maps.

Forbes writer Geoffrey Morrison, a man who is neither a fan of Pokemon nor mobile gaming, tried playing the game on a trip to London and loved using it as a tool for discovery. “Is every Pokéstop cool? No, of course not, but if you’re like me and just like exploring different cities, this adds an extra level to it while pointing out some stuff one might otherwise miss.”

Besides PokeStops, the game also features Gyms where Pokemon Trainers can meet in person for Pokemon duels over the phone. Just like a PokeStop, a gym could be a bus stop, a cafe, or any other location in town. Lures (a bait you can drop to attract wild Pokemon), rare Pokemon, and the Gyms have attracted hordes of players. The app has created local communities of Pokemon Trainers around the world. As a result, impromptu meet ups are popping up all around town. Complete strangers are meeting up to complete their mission of catching em’ all.

In New Zealand, Christchurch is the hotspot for Pokemon Trainers. “There’s a real atmosphere – people go down there and all catch Pokemon together. Everybody’s smiling, everybody’s happy. Everyone’s got something in common, so you can start up conversations and make new friends,” says Currie.

On the other hand, the game warns players to be aware of their surroundings while they are playing the game. It’s an important advice as it is easy to miss a curb, fall off a cliff, or run across the street without looking for traffic when your eyes are fixated on the phone.

A player in New York even crashed his car into a tree while playing the game. This problem is so distressing the local police department had to release a safety statement reminding the public to “use common sense” when playing the game. Amongst the safety reminders are:

1. Don’t play the game when you are driving or cycling

3. Don’t stare at your phone and be aware of hazards like roadways, drop-offs and waterway. Look where you are going.

4. Be cautious of who you share your location with

5. Be careful of where your PokeStops are. Do not blindly follow the map without looking.

The last tip is an important one for you Pokemon Trainer-Travellers, especially if you are out hunting in a city that you are not familiar with. In Missouri, armed robbers have been known to use the geolocation feature in the game to lure victims to isolated locations.

Tip:
How To Protect Yourself From Becoming A Pickpocket Victim

There is also a possibility of becoming so engrossed in the game that you forget to fully appreciate the sites you’ve discovered with your eyes, and not just through your phone screen.

Our advice? Bring an extra battery pack and use Pokemon Go to get yourself to interesting, off-the-beaten paths around town and to discover new and curious sights. But when you are there, put the phone down and enjoy the moment. After all, moments are fleeting but that Pikachu, however rare, will come by again. Most importantly, when playing the rules of Pokemon, don’t forget the rules of the real world. 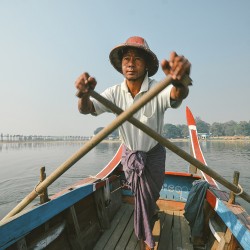