For the first time ever, Singapore Airlines has hired two female pilots, making SIA the last passenger carrier in the republic to hire women to fly its planes. According to The Straits Times, SilkAir, Scoot, Jetstar Asia and TigerAir already have women pilots.

The two unnamed female pilots joined the SIA team last August during the intake of cadet pilots, but will still have to undergo two to three years of training before they are rostered for commercial flights. Upon completing their training, they will join the airline’s 2,000 exclusively-male pilots.

This is a significant step forward not only for SIA but also for women in the aviation industry. Among Singaporean carriers, women pilots make up less than 1% of the total pilot population, with SIA only having 0.1% of women pilots. The global percentage is not any better; the International Society of Women Airline Pilots estimates the global figure of women pilots at only 5%.

The first woman to receive a commercial pilot license was Helen Richey, who was hired as a pilot for US’ Central Airlines back in 1934. The fact that it took Singapore Airlines so long to join the history books highlights prevailing stigma against women in the workforce.

While women are making advances in the workforce, those in aviation are still being held back by antiquated ideas that pregnancy will stop them effectively fulfilling their duties. An unidentified pilot told The Straits Times “SIA trains cadets from scratch at a cost of more than $200,000 for each trainee. It’s a significant investment so you want to ensure that the pilots you train are always operationally ready. This is not possible when women are pregnant and have to be grounded, usually for a year or more.”

Simultaneously, The Telegraph opines that the lack of female pilots stems from the very fact that women are discouraged from joining the industry from a very young age. “Perhaps girls don’t consider a career as a pilot because they don’t see women in the media as pilots, they’re generally played by men,” Melissa Holland-Smith, a British Airways pilot was quoted saying. She continued explaining that we need to break down that stereotype and show young girls that piloting is also a possible career option.

SIA did not explain why it has finally opened its cockpit to women though the shortage of pilots in the industry might be a contributing factor. Bloomberg reports that with the travel boom, gender biases are pushed aside to meet the hungry demand for pilots.

Turkish Airlines is aware of this and has invited Saudi Arabian women to join the airline if they cannot find a job in the Kingdom. “There is a global shortage in number of pilots. This shortage will reach to about 100,000 pilots by 2020,” said Turkish Airlines General Manager Temel Kotil to Saudi Gazette.

The Straits Times reckon that SIA is possibly the last major airline in the world to have women in the cockpit. Slowly but surely, female pilots are starting to take flight. Conservative countries like Brunei, Zimbabwe, and India have all recently celebrated its all-women flight. Hopefully, Singapore (and Malaysia) is next.

We are looking forward to the day a women’s voice announcing “this is your captain speaking” does not raise any surprised eyebrows. 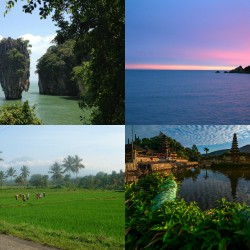 
These Are The Best Islands In Asia Accor...