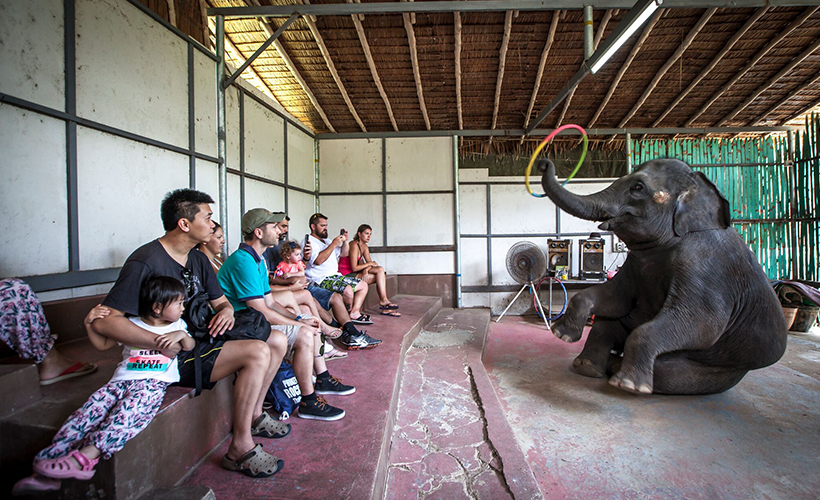 Aaron Gekoski is an environmental photojournalist from the UK who has spent over a decade documenting human-animal conflict. He has recently garnered much attention for his photography project which highlights animal cruelty at wildlife tourism attractions in Thailand. He spoke with Zafigo about the issues with wildlife tourism, being a responsible tourist, and his own goals.

Why did you choose to document this in Thailand? 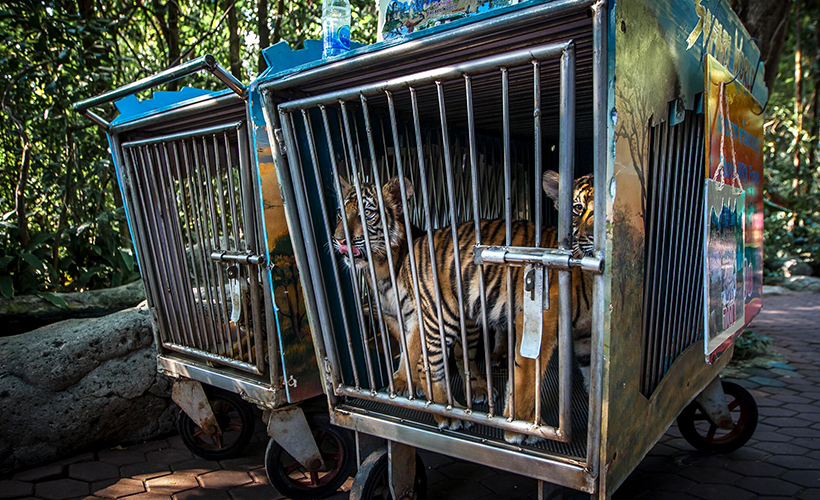 This is a worldwide problem. It’s not just Thailand, it’s happening in [the United States of] America, the UK, and other places in the west too. Thailand seems to be the epicentre [of wildlife cruelty] as a lot of animals are kept in captivity in a country that has non-specific laws regarding cruelty. The Prevention of Cruelty Act isn’t specific on how big a holding area should be, what you should feed animals, what constitutes cruelty, and how an animal should be trained.

There are things like orangutan boxing shows daily. The majority of people are laughing at it and don’t seem to notice anything wrong, but they don’t see behind the scenes and how the animal may be trained, for example. Also, in other places, animals may have been taken from the wild and then have to live the rest of their lives in captivity.

What did you witness on your trip in Thailand? 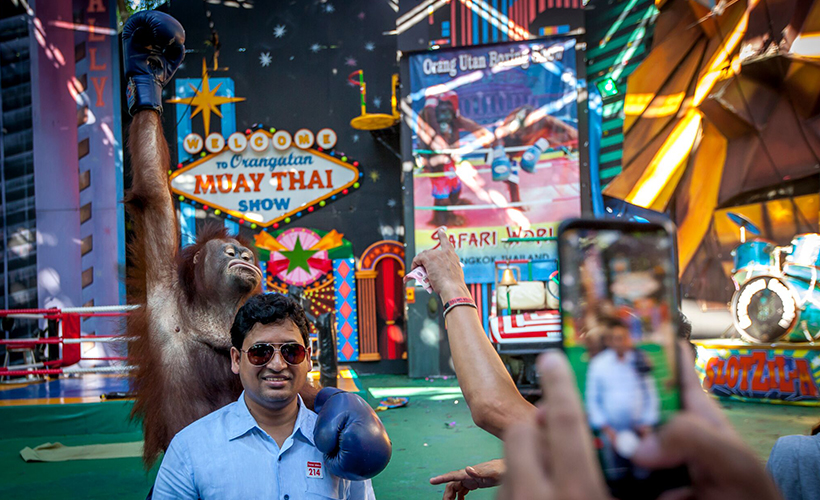 The boxing orangutan shows were very bad. There were elephant rides being offered at Samutprakarn Crocodile Farm and Zoo, and the elephants were not in a good state. They were skinny, swaying around and didn’t look healthy. Crocodiles there were in poor conditions.

Pata Zoo has four orangutans, a gorilla, and some chimps kept in filthy small cells at this zoo at the top of a shopping mall. They have no stimulation and [live in] an unsuitable environment. At Phuket Safari ECO+, there was a monkey theatre and elephants being made to perform in small rooms. It’s not happening just in Thailand, I really want to stress that.

Are there some places branding themselves as fair and sustainable but not necessarily abiding by these practices? 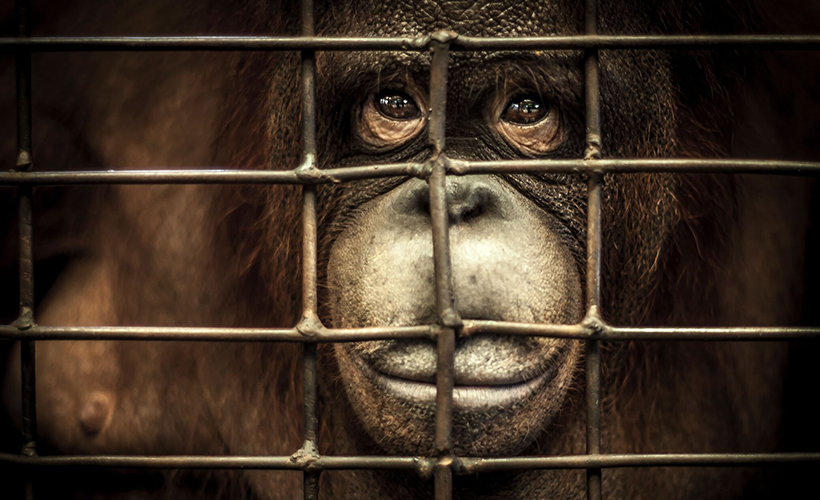 It’s quite common for places to greenwash. A lot of places dress themselves up as conservation initiatives. They say they’re all about conservation and about reintroduction, but often, they don’t end up doing it. They are money-making schemes working to the detriment of animals. I’m not anti-captivity; there are many zoos doing good things for conservation. I’m anti-cruelty. That’s the goal of this project, to fight cruelty.

Can you name some wildlife tourism operations worthy of support and others to avoid?

In Thailand, Wildlife Friends of Thailand are doing amazing things and have an excellent reputation. Safari World [Bangkok] is the glitziest, the most Disney-fied. What we witnessed was orangutan boxing and a morbidly obese orangutan who sat in a holding area that was much too small, begging for food. It doesn’t fill you with much hope when at the most high-end attraction you witness some of these shows and alarming situations. Phuket Zoo wasn’t great either, and Pata Zoo has had a lot of bad press also.

On the other hand, places like Houston Zoo and London Zoo put a lot of money into conservation. I used to live in London and visit London Zoo. Seeing animals up close inspired me to get into this industry. Most people don’t have access to these animals, so zoos and aquariums are important, but they must be done responsibly. If they can’t be, they shouldn’t be allowed to operate.

Did you have any difficulty getting these shots? I just paid for tickets and filmed animals as I found them. This is all imagery that’s available and open to the public at any time. Those cage images weren’t behind the scenes, these are conditions animals live in.

I don’t want to speculate, but everything I hear about how these animals are kept and trained is bad. For example, elephants go through something called the crush, which is the most horrific form of animal abuse possible. They are literally beaten; their spirits are broken by handlers and they’re beaten until completely submissive.

What reactions have you had to your project? 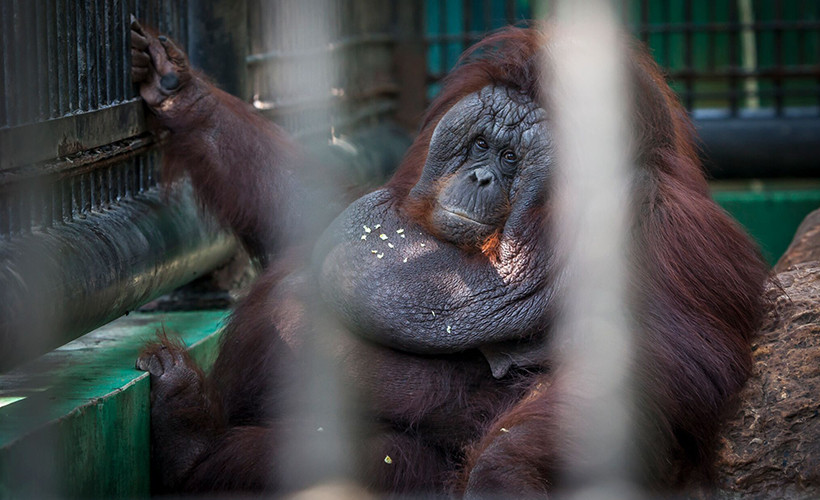 I’ve seen the worst sides of humanity, and on the back of this, also seen some of the best. People have been donating; someone’s buying me a new camera and a guy is building me a site for free. The idea is to set up a platform so people can flag certain operations. It’ll be called Raise The Red Flag. People can log on to the website and make a report with photos. Once there are enough reports, we will speak to relevant authorities and try to make as much noise as possible.

Do you have any tips for those when choosing wildlife-related tourism options? 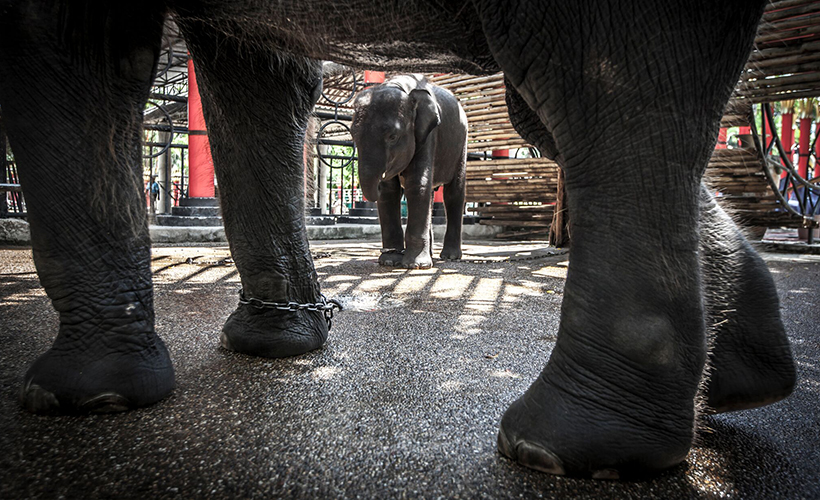 That’s why I’m setting up this platform, because there isn’t enough info out there. In general, if it involves animal shows and performances, there’s a red flag there right away. I don’t think animals should be made to perform for people because the way animals have been treated in order to make them perform is quite worrying. You can always do research on a place you are going to, check whether they have conservation initiatives, look at TripAdvisor and find out where they got the animals from. 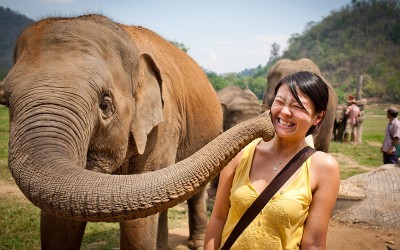 What I Learned From Visiting Thailand’s Famous Elephant Sanctuaries 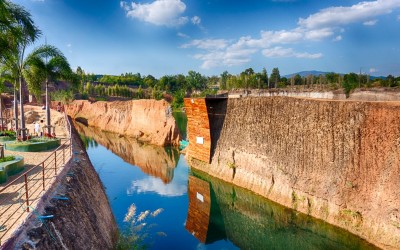 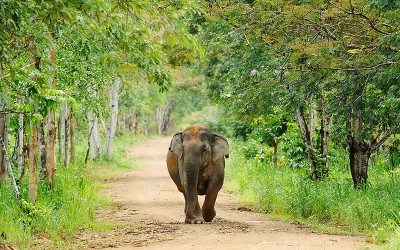 How To Get The Thailand Animal Experience Without The Cruelty 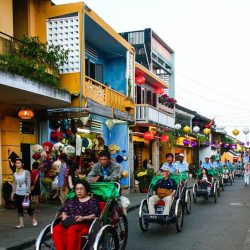 
Top Attractions In The Ancient Town Of H...