**[Update 12/7, 6.53pm]: After this article was initially published, we received comments and opinions from some of our readers who have either worked or lived in Fukushima. Understanding the concerns, we conducted a quick follow-up interview and posed the questions and feedback received to Keow Wee Loong for his comments.

While most people visit a country to see its sight and sounds, Malaysian photographer Keow Wee Loong chose an unexpected “tourist” destination – the Fukushima exclusion zone in Japan.

That’s right, the town that suffered the worst nuclear disaster since Chernobyl. Located only an hour and a half away from Tokyo, Fukushima was once a popular tourist destination with its hot spring villages (onsen) and traditional kokeshi dolls. The 2011 Fukushima Daiichi Nuclear Power Plant triple meltdown devasted the affected towns into a ghost town. 470,000 people were evacuated from the area. They dropped everything and left immediately, leaving their possessions behind. To protect people from radiation poisoning, the government designated a 20KM radius around the power plant that is until now still prohibited without a special permit from the local council.

Keow snuck into the Fukushima Exclusion Zone with a Japanese friend and photographed the eerie scenes of the abandoned town. The photos, reminiscent of a post-apocalyptic wasteland, are haunting. All the items, from parked cars to half-folded laundry, are still exactly where they left them five years ago.

“Not many people [have] seen this town for the last 5 years… [It’s] like it vanished… I can find food, money, gold, laptops and other valuables in the red zone… I’m [amazed] that nobody looted this town clean. Unlike Chernobyl [where] the entire town [had] been looted clean,” Keow said in his Facebook post.

It was as if time stood still.

The radiation levels are still very high in the Red Zone. Keow could feel it as soon as he crossed the borders. “When I entered the red zone, I could feel a burning sensation in my eyes and thick chemical smell in the air,” he said.

The photos have gone viral on Facebook since it was published on Sunday. While many are in awe of Keow’s photos, the other camp is horrified by his stunt. Angry commenters say his action is irresponsible and risky not only to his own health but to the health of his family and those he comes in contact with. On top of that, they said he, as a visitor to the country, broke the law when he entered it illegally.

**[Update 12/6/2016] As the virality of Keow’s photos reached international shores, people living in Fukushima are offended by it. The Fukushima nuclear accident and how it has affected the locals and their livelihood is an issue close to their hearts. For them, breaking into the site was a very insensitive and rude action. Explaining that the photos are a misrepresentation of the Fukushima community, they questioned how he could blatantly disrespect the Fukushima community and the lives and livelihoods that were lost. One angry commenter described his act as an “exploitation” of the Fukushima prefecture and its people for his own agenda.

**[Update 14/6/2016] “As someone living in Fukushima, I think we (sic) can speak for all of us when I say that we are upset that this man illegally entered [the area]. Not only is what he did illegal, but beyond disrespectful to victims of the disaster. Additionally, his post is full of misinformation about the disaster, radiation, and much more. The spread of incorrect information is exactly what the people of Fukushima have struggled with, and are continuing to fight against,” says 23-year-old Emily Liew, a Malaysian who has lived in Fukushima for a year as an Assistant Language Teacher.

There is also concerns the photos are encouraging others to engage in the risky behaviour as people are seen tagging their friends in the photos and commenting that they too want to visit Fukushima. Some have gone to the extent of reporting his photo album to the authorities and Facebook. At publishing time, Keow is barred on Facebook for “inflicting violence”.

We spoke to Keow to understand why he did this, his fears of radiation poisoning, and people’s criticism of him.

Why did you go to the Fukushima Exclusion Zone of all places?

Since young, I’ve always wanted to see what a ghost town would look like. I wanted to see the aftermath of the Fukushima Daiichi power plant disaster. And as a photographer, I wanted to capture what I could and share it with the world as not many photographers have access to these places.

Weren’t you worried about the radiation?

I was just going there for a day, so I wasn’t too worried about it. During my research, safety information stated that it is okay to be there for no longer than a day. Besides, there were many policemen and Tepco (Tokyo Electric Power Company) employees working in the area too. Residents are granted a visitor pass every month so they can return home to clean up for five hours. Tepco employees go there every weekend to remove radioactive waste.

What preparation or safety precautions did you do before entering the Red Zone?

I wanted to purchase a safety suit in Japan but I lost all my cash and credit cards in Tokyo. I was literally left penniless. So I had to use whatever I had on me. But I couldn’t abandon the Fukushima project because I had lost too much. It was a do or die situation. Most of my trip is self-funded and heavily relied on the sale of my photos to foreign press. I needed to go on with the project and use those photos to recuperate my losses.

Did you go for safety checks after leaving the Red Zone?

Yes. There is a safety booth at the Yellow Zone where I went for a check before leaving. I went for a scan and was rated ‘normal’. They said I was fine as I did not overstay.  So it (the visit to Fukushima) won’t bring any serious health hazards.

People are angry at your “stunt”. They say you are being irresponsible, especially now that you have a risk of contaminating your friends and family.

I would say that these people understand nothing. The air in Japan in contaminated, the food supply in the Pacific Ocean is contaminated, yet the Japanese are consuming it every day. These people look at radiation as if it is some sort of virus like Ebola or SARS that will kill others upon contact. The contamination I had is nothing more than people receiving radiotherapy for cancer. People won’t die or have health issues when I touch them. It’s like you won’t die from entering X-Ray two or three times a day. The human body is not as weak as we think. We are exposed to radiation every day but we don’t even know it.

What is more dangerous that me is (sic) secondhand smoke or fried foods that Malaysians consume every day. These people are just too paranoid and freaked out.

(Editor’s note: A reader who works in the medical healthcare field dealing with x-ray radiation and radiation safety has informed us that “radiation is not like eating bad food. It stays with you & depending on the severity of the exposure, may cause damage on a molecular level that is not visible for many years.”)

Look, I am a photographer and photography is my job. A lot of these commentators say I am seeking publicity. That’s a stupid thing to say because as photographers, of course we want our photos to be published! Every photo published is a sale for us. Without publicity, we can’t survive as a photographer. What’s the point of capturing the images and not publish it?! How could a photographer survive without the publicity of his or her work? What I did is not a stunt. I just did what I needed to do as a photographer – to capture images, to document my journey, and share it with the world. Most of my photos are published worldwide in Europe, China, US, and most countries in Southeast Asia.

I am only doing this because it is not something everyone can do. If everyone can afford to go to Japan and visit Fukushima, then there is no need for me to be there. People can just go there and see it for themselves.

Would you recommend this to anyone else?

No, of course. There is a big risk of getting arrested, navigation is tricky and you might get lost. You have to be prepared not to have children for the next two years, just to be safe. You need to put on a full gas mask to avoid inhaling the air into your organs, even if you don’t have a proper protection suit.

Some have commented that you broke in illegally.

I walked into the area through the woods, and that to me wasn’t breaking in.

But you have said yourself there is a special permit by the local council needed to enter.

Yes, there is a special permit that needs to be approved by a local council, it takes two to three weeks. I wanted to apply for the permit and had allocated 300,000 yen (USD2918.54) to cover the cost of the application and to stay in Fukushima throughout the waiting period. However, I lost all 300,000 yen and my cards when I was in Tokyo. I made a police report, stayed for a week hoping for someone to return the money but it didn’t happen.

So, it wasn’t that I didn’t want to follow the protocol, I couldn’t afford to anymore. I had lost too much to give up on this project.

Did you think it would be insensitive or disrespectful to the locals?

To me, I was just photographing, doing my job to show people what had happened in Fukushima. There are many photographers who have done the exact same thing (of photographing the Red Zone). Would it then mean that people with the permit are sensitive, but because I didn’t have a permit I am insensitive? I don’t believe I was being rude, I didn’t break any glasses, loot, or remove anything from the area.

People working in Fukushima say the photos give a false impression of Fukushima as the towns outside the restricted area are healthy, happy, and beautiful. Did you photograph other parts of Fukushima?

I only visited the restricted area. I didn’t go to the central town as I couldn’t afford to. Besides, that was not the story that I wanted to cover. I was there to cover the main story (of the aftermath of the nuclear disaster).

You seem to have angered a community of people in Fukushima.

If the residents of Fukushima were offended, then I sincerely apologise. I did not mean any offense.

I just wanted to tell the story and show what’s happening in Fukushima itself. There are many Japanese people who had entered the Red Zone the same way I did, the only difference is, they go undetected. (Editor’s note: A Japanese friend accompanied Keow through the woods into the Red Zone). My downfall is my photos went viral.

Again, if the residents of Fukushima are hurt from what I did, I humbly apologise.

These photos are published with full permission from the photographer. To see the full album, go to Keow Wee Loong’s Facebook page. 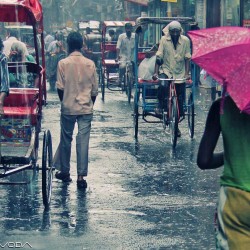