*The author of this article wishes to remain anonymous.

I used to be homophobic and transphobic. I know, not the nicest thing to hear given the context. Like everyone else, growing up, I was taught that there exist only two sexes in this world, and therefore there are only two genders. Little did I know that this concept we all accept as ‘normal’ is a product of colonialism and the patriarchy.

Being assigned female at birth (AFAB), I’ve never felt comfortable in my own skin and always thought that if I kept trying to wear skirts, dresses, and try on some makeup like everyone else, eventually, I would fit in. That was not the case at all. No matter how much I tried, it felt really uncomfortable, I did not see myself, and I did not feel like me.

Now, I find solace in the trans and non-binary community, where I’ve found safe spaces and words that fit who I have always been. Of course, it’s not all sunshine and rainbows. People argue that being trans is against “nature” and “science”.

I stand in solidarity with all my trans siblings who will never be able to be themselves for fear of their own life and safety. This Transgender Day of Visibility (TDOV), we ask our trans siblings to answer these three questions:

Here are their answers.

If TDOV is on a weekday, I’ll be working. This day doesn’t mean much to me — as it stands, trans people still aren’t given basic human rights. Allies can donate to trans folks, not out* their trans friends to others without their consent, and support trans folks by giving them the same career opportunities in workplaces. I hope trans people will have better surgeons, more accessible access to HRT (Hormone Replacement Therapy) and gender-affirming therapy.

*Writer’s note: Most trans women struggle to find secure jobs, and for some, sex work becomes their only source of income. Trans women are also more likely to be harassed on the streets.

*Out: Disclosing to others an LGBTQ person’s sexual orientation or gender identity without that person’s consent.

TDOV is a day of celebrating our struggles and strides to fight for human rights and a day to increase awareness about us. I personally will be a bit louder with my gender identity, like posting trans content on social media, bringing around subtle signs (e.g., charms with the trans flag) when heading out, etc.

Allies, use your trans friend’s chosen name and pronouns, don’t deadname* them, and respect their feelings. I also encourage allies to understand us and our plight and aid us in our fight against discrimination.

I do hope that the wider Malaysian society would grow to become more accepting of trans people and for the government to begin the process of decriminalisation and legalisation for the wider LGBTQ community.

*Deadname: Call a transgender person by their birth name when they have chosen a new name for themselves.

Transgender Day of Visibility means being visible, being open and normalising conversations about transness. I usually write a post about my thoughts and reflections. Also, openly wearing trans colours for the day. (I wear my trans shoes daily either way).

Allies can show up better by learning about pronouns, respecting name changes, and speaking up in the presence of discrimination (whether their trans friend is beside them or not).

On TDOV, I will probably cry and sulk on why I still can’t medically transition* and show support to my other trans brothers, trans sisters and trans siblings. Allies can help support and fight for legislation that decriminalises LGBTQ folks in Malaysia. As for our future in Malaysia, sadly, some of us privileged ones migrate to other countries. For others, unless there is a change in legislation, I don’t have much hope.

*Transition: Transitioning is when a person begins to live according to their gender identity, rather than the gender they were thought to be at birth. Medical transition usually involves HRT or surgery. Although, not all transgender people decide to or can transition (due to limited access or personal safety). Note: It is also considered rude to ask trans people about their transition. It is the equivalent of asking anyone what’s in their pants.

On this day, I take pride and value in my identity. To allies, boost trans voices, don’t speak over trans experiences, support trans businesses, and spread trans joy. As for my hope for the future of trans people in Malaysia? Quite minimal. Unless we do our part to vote for change, I hope things will improve soon.

On TDOV, I make my friends spoil me to account for the cisgender systemic and institutional injustice I face, from which they benefit.

Allies should speak up when they hear discussions about trans people and our bodies because our bodies aren’t up for discussion or debate. For instance, when someone asks if their friend is trans, they can reply, “That seems very personal. Maybe you should ask them about it?”. Or if people are discussing a trans person’s genitals, they can say, “That’s really weird to be discussing someone’s genitals like that”.

My hope for the future of trans people in Malaysia is that we get to thrive in a less bigoted society.

What I usually do on TDOV is go through my social media and see others’ posts on that day. Whether it is seeing people come out, talk about those who have fought for us, or those still fighting for our rights. I like reading stories about their journey, their fight. It makes me feel less alone being who I really am. It also helps me be a better part of this community.

Allies can show up better for their trans friends with respect, whether using the correct pronouns or the right name. It’s all about respect and opening your heart and eyes to see that even when certain things have changed, you know that person is still the same. The only difference is that this person has finally become who they are. They have found their path. They’re out here finally accepting and loving themselves as they should. They finally found the courage to be who they are. Always remember that nothing has changed. They didn’t ask to be that way, and it is not a choice.

For the future of trans people in Malaysia, I would love for us to be recognised as humans. To be accepted and loved for who we are. I would love that someday we could legally be who we are supposed to be. I want us to be free from stigma, stereotypes, and laws binding us down and preventing us from being who we are. If you can give us a chance to be who we are without all of that, believe me, many of us will bring betterment to society. You would have enough manpower to change this country’s fate.

I am grateful that I have a community that understands how it feels to be a transgender person living in a cis* world. On TDOV, I usually have dinner with my fellow queer friends and celebrate life and speak about the troubles they might be going through.

How allies can show up for trans friends:

Hopes for the future of trans people in Malaysia:

*Cis (short for cisgender): Cisgender refers to a person whose gender identity corresponds with their sex assigned at birth.

I hope that this day (TDOV) would really ‘exist’ as in whereby each person living in this world, let it be rural or urban, is aware of trans people, and we are not viewed as “different” because that hurts.

Allies can help by just being true friends, standing by us without expecting anything in return, supporting us, being proud of us being true to ourselves, and lastly, joining hands to help everyone realise that we did not choose to be trans; we are just like everyone. In simple terms — we are just humans.

My hope for the future of trans people in Malaysia is for us to get our name and gender changed on our identification cards, certificates, and other legal documents. We should have autonomy over our lives, name and gender — all we want is our fundamental right to live. I hope that legislation that criminalises us are repealed. Then, instead of focusing on LGBTQ persons, we could all work towards helping others, such as fighting for justice, fighting for children to have better futures, eradicating poverty, and helping victims of abuse. 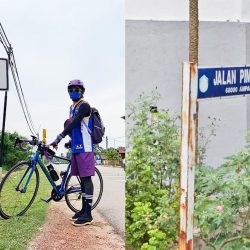