FOUNDER OF SAREES AND STORIES

Sumitra is a radio presenter and producer on BFM’s The Bigger Picture, where she enjoys having conversations on topics ranging from actuarial science to zoology. She began her broadcasting career as a national news anchor and after 10 years shifted gears into public relations. In the last five years, Sumitra has wandered back into media and entertainment by helming television talk shows and current affairs programmes.

Sumitra also started writing creative fiction years ago; her first short story, The Starlight Studio, was published by a Southeast Asian online literary journal, while Appa’s Mutton Curry was awarded runners-up at the 2016 DK Dutt Memorial Prize for Literary Excellence. She also won the 2018 Short Story Prize at the Asian Women Writers Festival in Singapore for her piece titled Recoil.

Sumitra is the founder of Sarees and Stories, an Instagram profile where she documents her daily saree wearing habit.

How to overcome them if it happens

Sumitra Selvaraj On Smashing Stereotypes In The Media Industry, Varnam.my 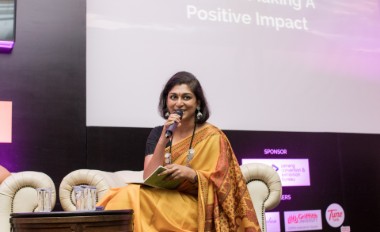